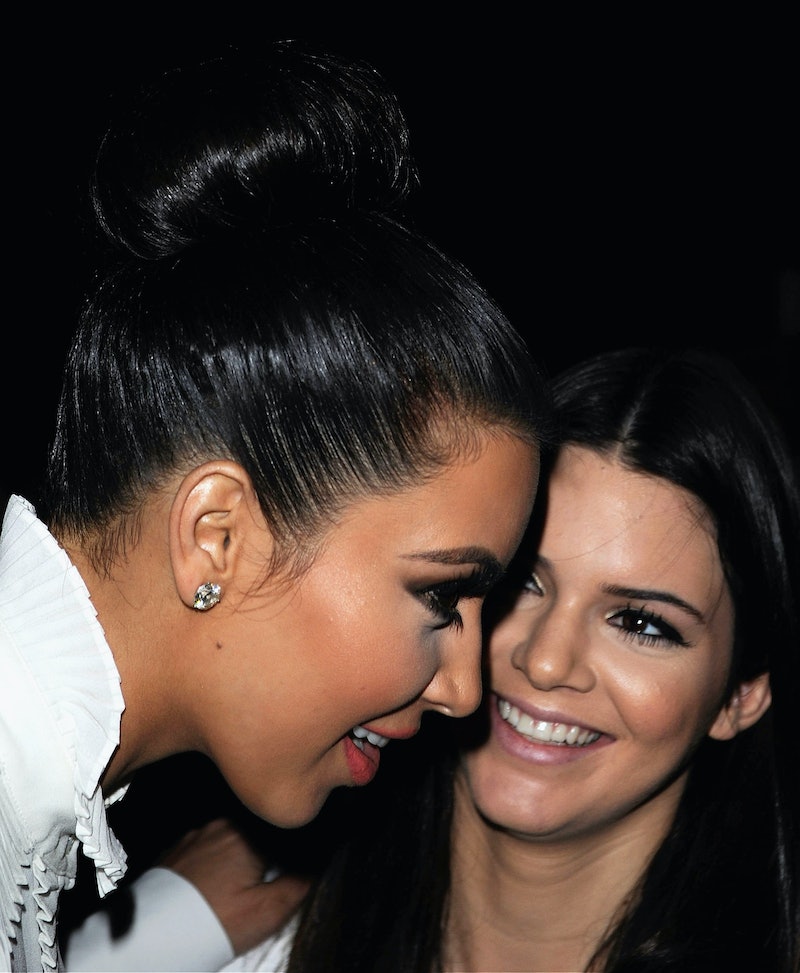 Even though it's not as universally debated as #TheDress, a long sleeved, velvet ensemble still made quite a splash during Paris Fashion Week. It also has the fashion world seeing double. That's because Kim Kardashian and Kendall Jenner wore the same Balmain dress on the same night. It's certainly not the first time that the fashionable sisters have appeared in public wearing similar outfits, but the fact that Kim wore the black velvet number at the Balmain fall 2015 runway show just hours before Kendall sported it at the designer's afterparty certainly raises a few questions:

1. Is it really just one dress and Kendall borrowed Kim's (or vice versa)?

The family has a close relationship with Balmain, so it's also possible that both simply own the same dress. No hand-me-downs for the Kardashian-Jenner klan.

Even though it's the same design, we still have to give it to Kim and Kendall for putting their own unique spin on the dress. The newly blond Kardashian wore a matching coat and sheer black tights with hers, while her sister went with a more minimal look and accessorized with a statement belt.

3. How could Kanye West let his wife commit such a fashion faux pas?

It seems the rapper was busy preparing for his surprise concerts when Dress-gate 2.0 went down and maybe didn't notice. Who are we kidding? This stunt might actually be part of West's upcoming Paris shows.

Check out Kim Kardashian and Kendall Jenner in the same black Balmain dress and tell us, whose Paris Fashion Week look do you prefer?

More like this
Everything Kendall Jenner Wore During New York Fashion Week
By Dominique Norman
Bella Hadid's Best Runway Looks Of All Time From Paris, Milan, & More
By Allie Fasanella
These Are Kylie Jenner's Best Paris Fashion Week Looks... So Far
By Dominique Norman
Confusion Reigns After Kanye Changes His Instagram Profile Pic To Kris Jenner
By Jake Viswanath
Get Even More From Bustle — Sign Up For The Newsletter