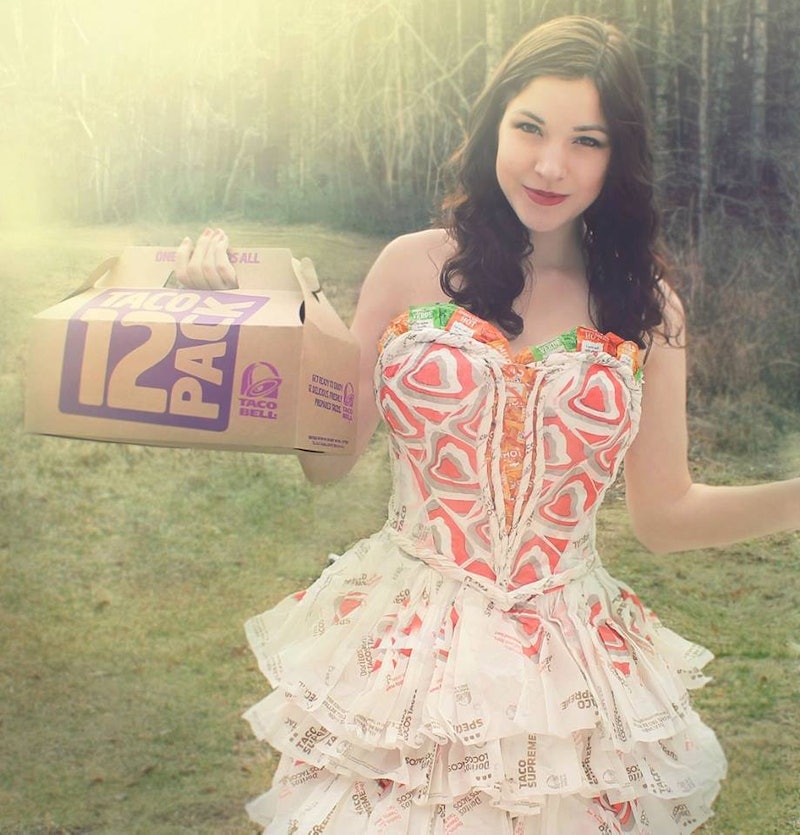 Regardless of how you feel about its menu, you have to give Taco Bell major props for making the unexpected possible time and time again. The same company that turned a Chihuahua into a pop culture icon, marketed Doritos chips as taco shells, and morphed Cap'n Crunch cereal with donut holes, has inspired a young costume artist to design a dress made out of Taco Bell wrappers. The Taco Bell dress is the innovative creation of 23-year-old Olivia Mears, who landed a featured spot in a national commercial for the restaurant chain.

Mears used more than 300 unused Taco Bell wrappers and sauce packets, and spent 10 hours to make her now-famous dress. The Cullowhee, NC native entered her creation in Taco Bell's "Live Más to Win Más" contest back in 2012, placing second. She won $100 and a t-shirt at the time, but it wasn't until Taco Bell contacted Mears a few weeks ago year to appear in a fan-inspired ad for its new Sriracha Quesarito that made the dress a star.

“I thought maybe they wanted some more pictures of it for their Facebook or something like that," Mears told ABC News. "But once they finally told me they wanted me to be in a commercial, I had a moment of complete excitement, just jumping around. It never really hit me what I was out there for; it felt like a vacation.”

Her appearance in the Taco Bell ad has helped Mears — who also goes by Avant-Geek — gain new fans. Her amazing costumes, inspired by Disney characters, Anime, and sci-fi films, can be viewed on her Facebook page.

"Wow! I had no idea I'd be receiving so much attention for my spot in the Taco Bell commercial, from news reporters to fans wanting their own dress (which I am all for)," Mears wrote on Facebook. "Thanks, y'all!"

More like this
The Chicest ’90s Updo Hairstyles To Try
By Paris Giles
TikTok's Butter Board Might Be The New Cheese Plate
By Emma Carey
On TikTok, Tinned Fish Date Night Is The Latest Viral Food Obsession
By Emma Carey
Amazon Is Selling A Ton Of These 50 Things That Seem Expensive But Are Cheap AF
By Julie Peck
Get Even More From Bustle — Sign Up For The Newsletter