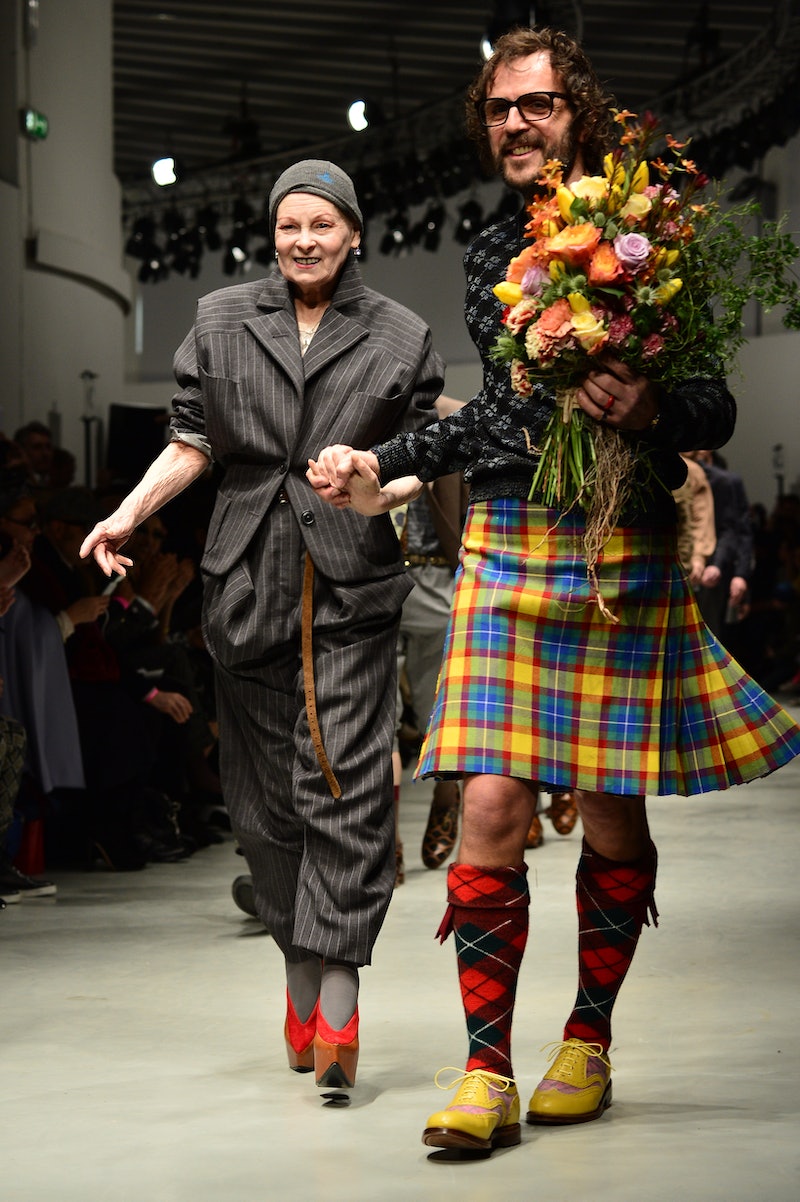 Paris Fashion Week has officially kicked off, bringing an end to the long, brutally cold Fashion Month that has unfolded on New York, London and Milan. Already, trends have been set for the coming seasons and the color of the year has been determined. Vivienne Westwood's ready-to-wear collection, which showed today, might have just introduced a refreshingly unisex approach to getting dress that could soon be added to the top of the fall 2015 trend round ups.

If you could imagine an episode of Game of Thrones mixed with Alice in Wonderland, then you can draft a pretty good image of the fantasy land that was Westwood's runway show. Glittery metallic streamers hung from the ceiling, some falling to cover the runway. Models' eyebrows were turned into unibrows, the #freethenipple movement was in full effect, and there were plenty new additions to those sky-high top hats that have become a defining fashion statement for Pharrell. Most notable, however, were the women in suits and men in dresses.

Women wore boxy plaid or striped suits with either heeled shoes or pointed-toe flats. Of course, it isn't uncommon for women to rock suits, sometimes better than men. However, it's not everyday that you see a muscular, tattoo-covered dude rocking a metallic manicure and corseted dress. But Vivienne Westwood might have just changed that. There weren't just men wearing kilts in a cool, hispter kind of way, but rather the male models rocked floor-length fringe skirts and belted dresses. To make sure the unisex message was very clear, Westwood walked the finale of her show with her husband and design partner, who wore a shirt that read "Unisex Time To Act."

By blurring gender lines and challenging gender norms, Westwood's outlook on fall doesn't involve pea coats and knee-high boots, but rather a magical take on androgyny. For fall, women can be just as chic in three-piece suits as they are in a cocktail dresses, and men can flex their muscles and show them off in glamourous dresses at the very same time.

More like this
Bella Hadid's Best Runway Looks Of All Time From Paris, Milan, & More
By Allie Fasanella
These Are Kylie Jenner's Best Paris Fashion Week Looks... So Far
By Dominique Norman
12 Stunning Beauty Moments From London Fashion Week S/S 2023
By Olivia Rose Ferreiro
Bella Hadid's Flare Jeans Under A Dress Outfit Is So Nostalgic
By Allie Fasanella
Get Even More From Bustle — Sign Up For The Newsletter