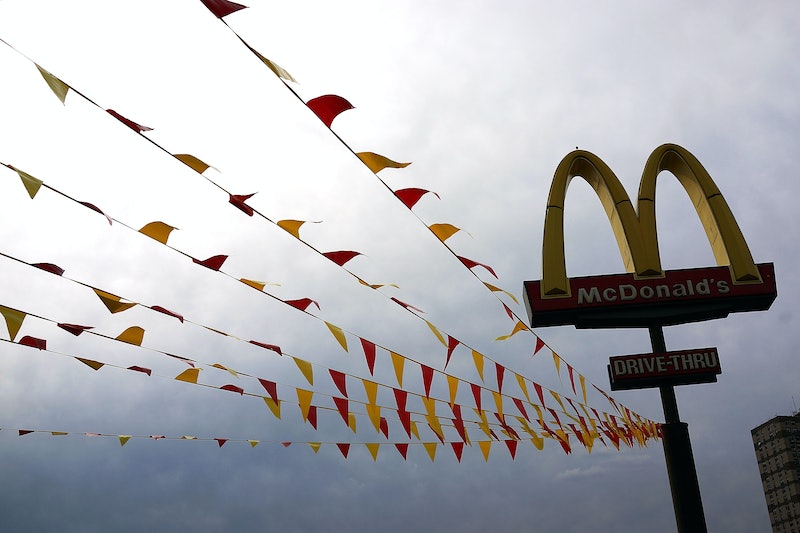 When you're an international multi-billion dollar corporation it wouldn't be a big deal to, you know, pay people. But apparently that the case, at least if McDonald's attempt to hire a band for free is any indication. Which really just leads one to wonder: what is the point of all that money if not to spend it?

McDonald's recently approached the indie band Ex Cops to play at their showcase at the South By Southwest (SXSW) festival in Austin, with one catch — they wouldn't be paid. But, McDonald's promised, it would be great exposure. I think I speak on behalf of all millennials when I say that never hear the word "exposure" again it will be too soon. Because I know McDonald's has that whole "pay with lovin'" promotion thing, but until they start accepting exposure in lieu of payment all day, every day, for all the years to come, they do not get to pretend that "exposure" is the same as money.

The band, unsurprisingly, was less than amused. And rather than just tell McDonald's "no," they went ahead and blasted the corporate giant on Facebook.

The duo went on to point out that they've received payment (and much better treatment) for playing gigs at much smaller, less well off venues, and called the company's attempt to exploit up and coming music acts "horrifying and gross."

The post went viral, with plenty of people adding comments in support of Ex Cops and blasting McDonald's. McDonald's, for their part, doesn't seem to be as ashamed as they should be.

"We follow the same standard protocol as other brands and sponsors by inviting talented and emerging musicians to join us at the SXSW Festival," a McDonald's Global Media Relations Director told Rolling Stone. "We look forward to serving McDonald's food, drinks and fun in Austin. #slownewsday"

Because, presumably, the only way anyone would be interested in a multibillion dollar corporation trying to exploit the little guy is because of a slow news day. It's not as though people frequently line up for blockbuster movies about people fighting the power, or like Western civilization has always had a soft spot for the David and Goliath story.

McDonald's might be making it sound like not paying acts is the norm at SXSW, but as Ex Cops member pointed out to Rolling Stone that isn't the truth. "They're not following any guidelines because everyone else is offering money," she said. "Other, smaller corporations are offering us money."

Personally, I don't understand how a company that clearly understands the value of money — otherwise how would they have accumulated so much of it? — doesn't understand that other people also like to be paid. And when people provide you with a service, they deserve to be paid. We do not live in a barter economy. This should not be news.

Plus, what exactly is the point of being valued at $90 billion if you're still too cheap to pay for anything? After all, you can be cheap while broke. Just saying.

More like this
Black Women's Equal Pay Day Highlights An Upsetting Problem
By Brandi Neal
Chris Kaba's Family Continue Fight For Justice After Viewing Police Bodycam Footage
By Sophie McEvoy
Women Around The World Are Cutting Their Hair In Solidarity With Mahsa Amini
By Darshita Goyal
Bustle Daily Newsletter: September 28, 2022
By Stephanie Talmadge
Get Even More From Bustle — Sign Up For The Newsletter