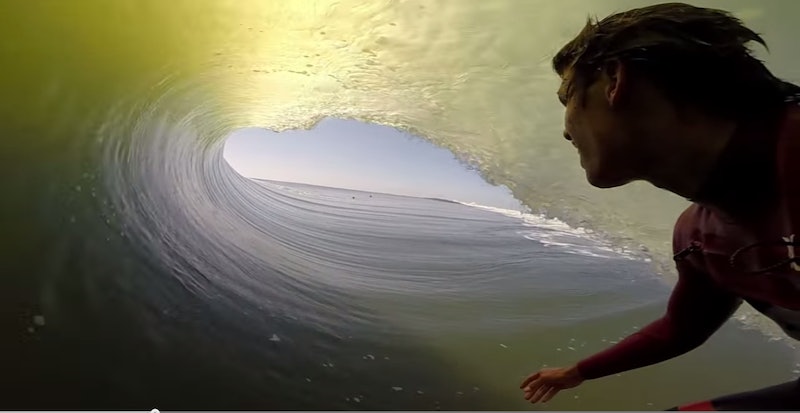 So I basically feel like surfing shouldn't exist. Not like I'm anti-surfing villain in a 1950s beach movie or anything; I mean that literally. If I were an alien and you told me "See those waves? Some people stand on boards and move around on them," I just straight up wouldn't believe you. What?! How is that even possible? I know there are physics behind it and all but I just can't understand. It seems so damn crazy to me, and if it doesn't seem crazy to you then I feel like you haven't seen the ocean lately or maybe ever. As far as I'm concerned, surfers are like wizards. Laid back, super-ripped, floppy-haired wizards who can control the waves. I view them with reverent awe and guarded suspicion; I fear and covet their powers as cavemen feared and coveted fire.

If all surfers are wizards then Koa Smith is like Gandalf. Smith is a professional who has a couple of national championships under his belt...or...whatever the wetsuit equivalent of a belt would be. Zipper? Anyway. He also runs lastnamefirst.tv with his brother, Alex. While surfing the Skeleton Coast off Namibia, Smith rode within the barrel of a wave—actually inside it—which is pretty cool in and of itself. What makes this amazing is that he managed this for 27 seconds. This guy maintained damn near perfect composure and balance inside one of the greatest natural forces on the face of the Earth...with a camera in his teeth...for 27 seconds.

Watch the video (depicting the moment once in hypnotic slow motion and once in quasi-terrifying real time) below. Then, after you've swept up all the pieces of your exploding head, sign up for some surf lessons.