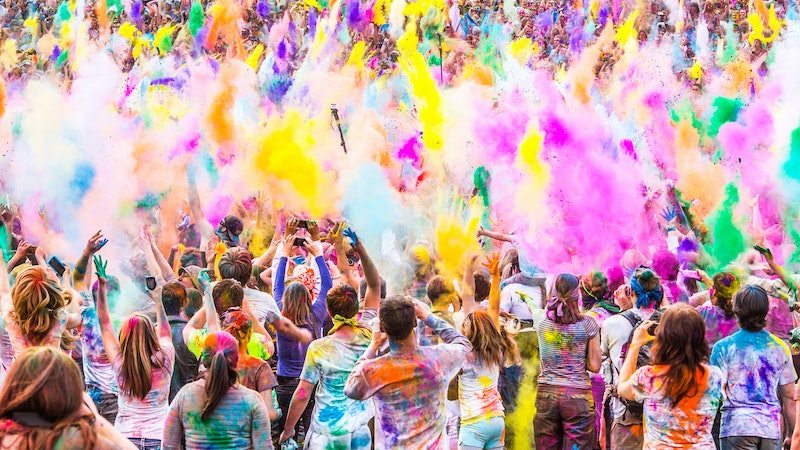 March has arrived, you've turned your clock forward, the snow is melting, and I think it's finally safe to say spring is on its way. So now what? Now it's time to celebrate the glorious season at any one of these eight United States spring festivals. These festivals are more than just picking flowers and eating under the sun — they're cultural events that are as memorable as they are celebratory. Trust me, you won't want to miss out on any of them. Yup, go ahead and pull out the bucket list.

Ranging from floral extravagance and hot air balloon events to live music concerts and feasting celebrations, all of these festivals offer something different to their attendees. Unique experiences for the uniquely minded, take a read through and see what spikes your interest. Chances are there are a few dates you'll want to mark on your calendar.

It's time to welcome spring with open arms. Winter was long enough, so get out of hibernation, pull out your warm day wardrobe, and book your tickets. Washington D.C., New Orleans, Austin, Portland, Decatur, Miami, Skagit, and a handful of other cities are waiting for you. Oh, and don't forget to bring your camera... you won't be able to put it down.

Washington D.C.'s National Cherry Blossom Festival runs for about three weeks straight at the end of March and into April. The festival represents the friendship between the United States and Japan and features public events that are related to the arts, community spirit, and international culture. Most famously, rows of cherry blossoms are in full bloom along the Tidal Basin, bringing in tourists from all over the United States.

The New Orleans' Wine & Food Experience really is, well, an experience. Held from May 20 to May 23 in a city that already has one of the strongest culinary scenes in the country, this festival is one you cannot miss. The city gets flooded with more than 10,000 visitors as hundreds of restaurants and wineries line the streets of the French Quarter. All you need to bring is your appetite.

Austin's beloved South by Southwest Festival, otherwise known as SXSW, is the place to be from March 13 to March 22 if you're a lover of film, music, or anything in-between. Some of this year's performers include The Damned, Portugal, The Man, and J. Cole. The festival will also be hosting the world premiere of 10 2015 films including The Boy, Sweaty Betty, and 6 Years.

The Portland Rose Festival stretches itself out from late March to early June, and has a calendar filled with dozens of events over the entire city, including Oregon's beloved Starlight Parade. Along with the "Awakening of the Dragon" event, the 82nd Avenue of Roses Parade, and the Rock 'N' Roll Half Marathon, this festival puts Portland on the map when it comes to spring travel.

Want to see the skies fill with color and giant balloons? Now's your chance. The Alabama Jubilee in Decatur, occurring on May 23 and May 24, is a favorite hot air balloon festival in the deep south. The participating balloons can be viewed online, and I promise you, even if you don't want to be in a basket, you'll get some pretty remarkable photographs of them floating above you.

Miami's Calle Ocho is the place to be if you're looking for some loud music, a wild crowd, and a good time. Taking place on March 15, this festival is one of Florida's most popular. Part of Carnaval Miami, the Calle Ocho music series includes a plethora of artists ranging from Exiel to Madai. Haven't heard of these guys? You're missing out.

The Skagit Tulip Festival is a month long event near coastal Washington, filling the city with visiting tourists from April 1 to April 30. Hundreds of thousands of visitors make their way to the Pacific Northwest every year to see the breathtaking Skagit Valley covered in rows of colorful, bloomed tulips. More of a "come as you please" event, this festival is perfect for nature lovers who like to experience the world at their own pace.

This colorful festival is celebrated around the world, including multiple United States cities. While the official Holi Festival is celebrated on the last full moon of the winter season in India, the U.S. celebrations run through May. The event is filled with colored powder and water balloons being thrown in the air to make for a sight you can't take your eyes off of. Signifying the beginning of spring, this festival is a must.

More like this
You Can Stay At The 'Hocus Pocus' House On Airbnb
By Alexis Morillo
Craving The Beach? Here's Your Guide To A Solo Vacation In Turks & Caicos
By Alexis Morillo
7 Symbolic Meanings Of Autumn — From Letting Go To Self Preservation
By Kirsten Nunez
5 Ways To Help People Impacted By Hurricane Ian In Cuba & Florida
By Emma Carey
Get Even More From Bustle — Sign Up For The Newsletter