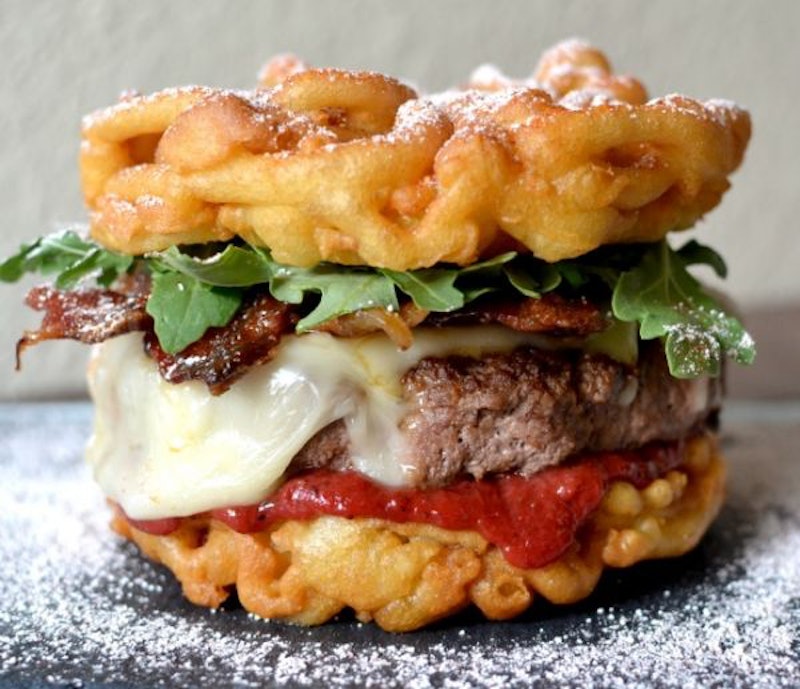 In today's edition of "food that will end in a painful death by heart attack long before middle age," someone has made a funnel cake bacon cheeseburger. If you didn't feel your arteries clanging shut just by reading that phrase, you're not paying attention. This glorious combination of questionable fair fare, meat, a different kind of meat, and cheese ended up on Imgur via Reddit a day ago with the caption "well, it's finally happened," Jezebel reports, and that really sums up the whole situation, doesn't it? The resignation. The sense of inevitability. The creation of a bacon cheeseburger held together by two fried blobs of dough is so quintessentially American that it was fated in the stars from the very moment John Hancock signed his name way too big on the Constitution.So who came up with this genius idea? According to Jezebel, it's the work of CulinaryBroDown's Josh Scherer, who actually posted the picture of his magnum opus a year ago. It's far from the only incarnation of this recipe — comments on the Imgur post claim that it's been a staple of the Wisconsin State Fair for years. Speaking of which, what is it about fairs that makes people want to fry everything?But enough speculation about why the funnel cake bacon cheeseburger exists. What does it look like?

Oh, my God. I knew I would get hungry writing this article, but I wasn't prepared for just how bad it would be. It's a good thing I have a terrible track record in the kitchen, or I'd be attempting to re-create this. For those of you who can cook...well, you're probably doomed. Despite the juice cleanse you'll probably end up needing afterward, it'll be so worth it.