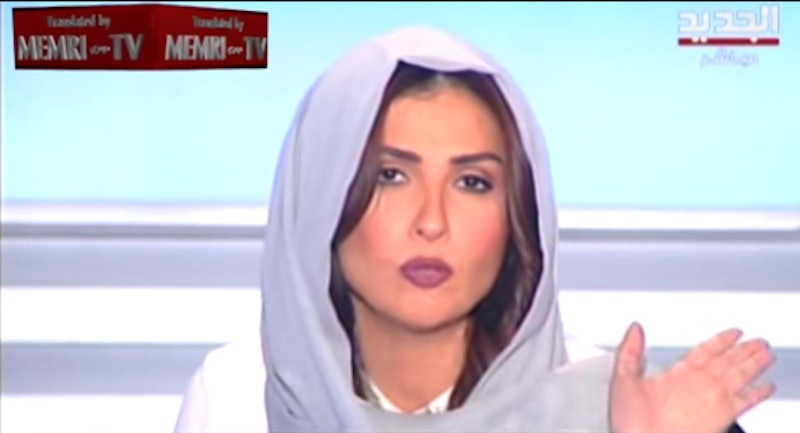 Don't you just love the sweet smell of straight up girl power in the morning? Earlier this week, Lebanese TV host Rima Karaki was told to shut up on her own show, and her response will make you want to flail around in your chair, chanting "you go, girl" under your breath as you fistpump. (Note: according to my sister that's not a normal response, but I refuse to believe I'm the only one who had that reaction. I'm counting on you guys to back me up here.) Either way, Karaki's verbal smackdown is entirely appropriate for my favorite holiday of the year, International Women's Day.Karaki was interviewing a male guest, Sunni Muslim scholar Hani al-Seba'i, about the possibility of Christian groups in the Middle East aligning themselves with ISIS, The Independent reports, when things took a turn for the sexist. When al-Seba'i's answer to a question about historical precedent ran way too long, Karaki stepped in to get the interview back on track, which is known in some circles as "literally doing her job as an interviewer." However, al-Seba'i didn't take her perceived interruption well, saying "I will answer as I please." Things pretty much went downhill from there.

Karaki tried to explain the time constraints on the interview, saying, "Please don't get all worked up. We respect you." However, al-Seba'i refused to calm down and Karaki started to lay down the law. After reminding him that "in this studio, I am the show," she gave him an opportunity to continue his interview.

But if al-Seba'i had apologized and respected the interviewer like a rational adult, you wouldn't be reading this article! He proceeded to tell Karaki to "shut up so [he] can talk."

"Enough. Let's wrap this up," she continued. Al-Seba'i was then cut off in the middle of his diatribe. This is around the time that I started flailing around in my chair.

Ugh. Karaki kept her composure, concluding with the statement, "Either there is mutual respect, or the conversation is over."

Not pictured: feminists everywhere with their hearts aflutter. You go, Rima Karaki.

Watch Karaki shut this guy down in full here:

More like this
Women Around The World Are Cutting Their Hair In Solidarity With Mahsa Amini
By Darshita Goyal
Black Women's Equal Pay Day Highlights An Upsetting Problem
By Brandi Neal
Self Esteem's “F*cking Wizardry” Is An Anthem About Knowing Your Worth
By El Hunt
Bennifer, Kravis, & 14 Other Fun Celeb Couples Halloween Costume Ideas
By Emma Carey and Brittany Leitner
Get Even More From Bustle — Sign Up For The Newsletter