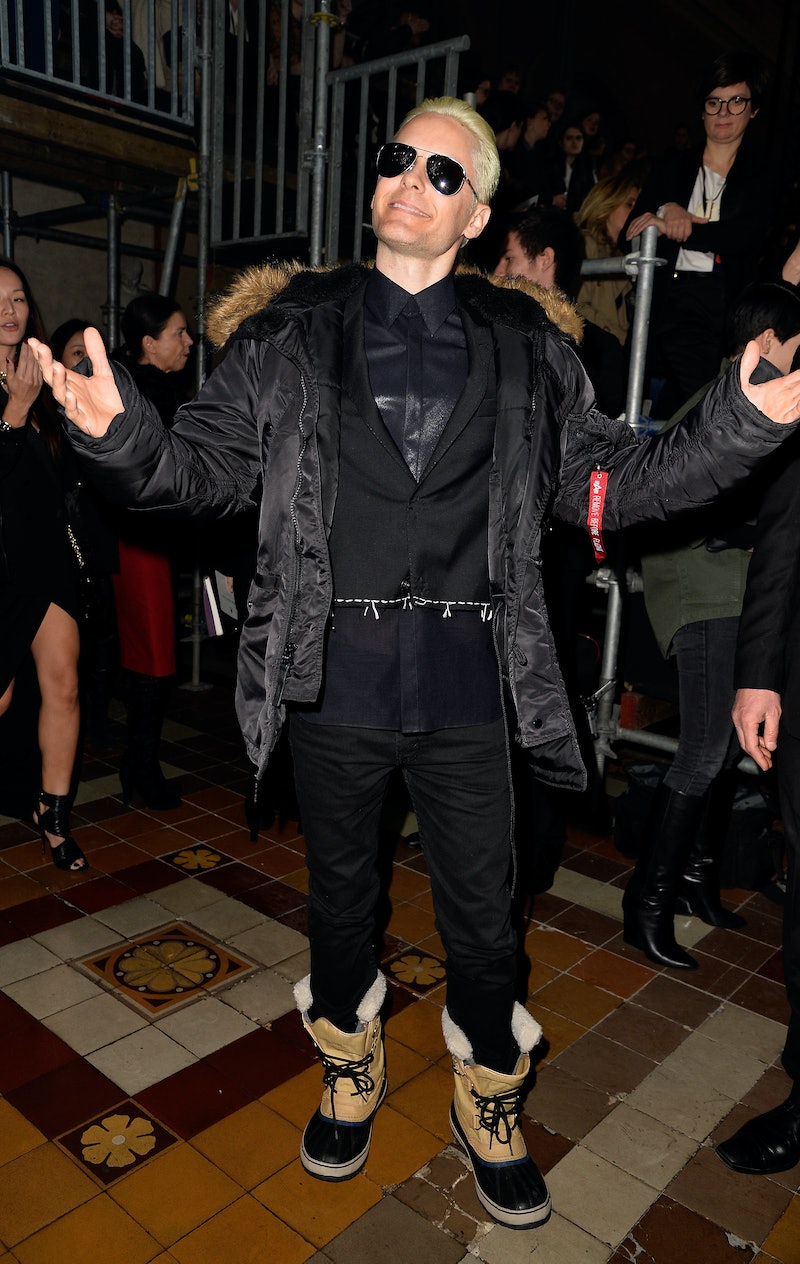 Jared Leto is a simple man of simple tastes. He likes Aztec-print jackets, his aviator sunglasses, and ruining the event photos of his famous contemporaries. This weekend at a Paris Fashion Week event, Jared Leto photobombed fashion people and switched up his usual tune of photobombing actors and actresses. It would appear that his recent haircut and dye job have done nothing to diminish his enthusiasm for mischief making. I am resoundingly grateful for this.

Leto has been quite the man about Paris this week, but surprisingly, he's been successfully playing it cool while pictures were being taken. He attended the Balmain show looking serious. He posed with fellow bottle blonde Kim Kardashian at the Balmain after party looking serious. He wore a cape and lounged in a chic little cafe looking serious. Frankly, the fact that Leto has been able to suppress his inherent urge to photobomb throughout days of photo op's is nothing short of miraculous. But just as a tiger can't pretend to be a giraffe, Leto can't pretend to be a serious photo-taker. He had to break eventually.

And when he broke, he broke hard. He photobombed a model selfie with Gigi Hadid, Lily Donaldson, Doutzen Kroes, and Carine Roitfeld. Due to a slightly unfortunate angle, Leto sort of looks like the big bad wolf of this model cluster selfie.

Later, he executed a sneak attack behind Younghee Lee, Hadid, and Roitfeld. Whelp, if you're gonna go for it, really go for it.

I guess blondes really do have more fun.

More like this
Bella Hadid's Best Runway Looks Of All Time From Paris, Milan, & More
By Allie Fasanella
I Can’t Stop Thinking About Emily Ratajkowski's Exposed Thong Look
By Allie Fasanella
Emily Ratajkowski Wore A Sheer Bra At Tory Burch’s NYFW Show
By Alyssa Hardy
Anne Hathaway Revived 'The Devil Wears Prada' In The Most Andy Sachs Way
By El Hunt
Get Even More From Bustle — Sign Up For The Newsletter