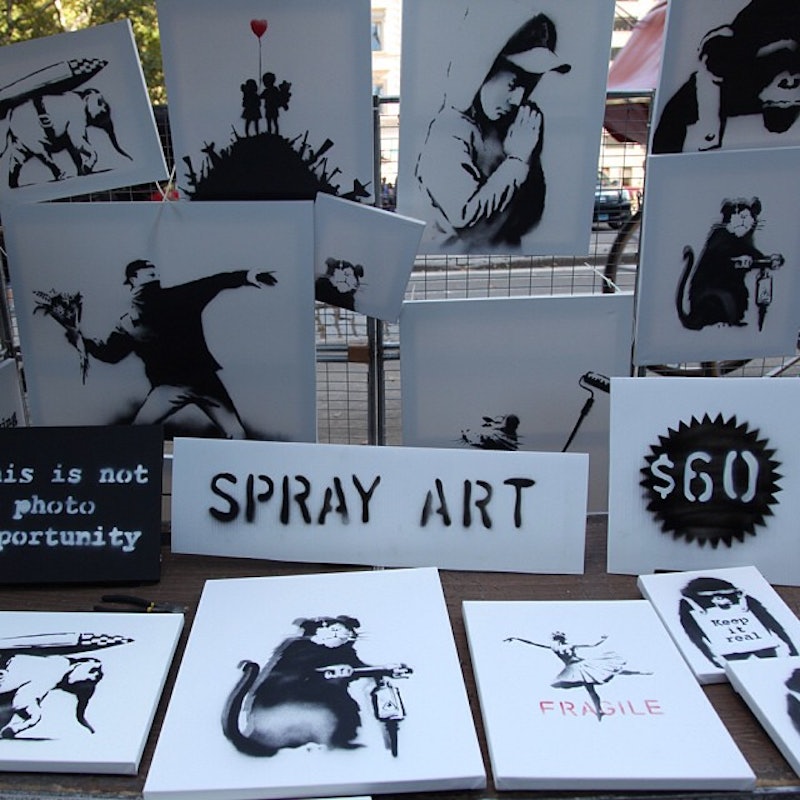 Banksy's weekend stunt in New York City will, no doubt, give birth to a thousand scam artists. The legendary graffiti artist set up a stand outside Central Park on Saturday, at which an elderly man sold a total of eight Banksys to just three people for $60 a piece.

Now, that might not be cheap in comparison to other wares at similar stands, sure, but it sure is cheap for Banksys. Unbelievably so. When the rock star artist graffitied a wall in East New York earlier last week, some entrepreneurial locals set up shop, charging $20 for a viewing after one of them failed to cut the artwork out of a brick wall. A different piece was sold for $249,000 at an auction over the summer.

The artist, meanwhile, only took home $420 over the weekend. (No word yet on how much he paid the man to sit outside all day.) If we do some quick math (with a calculator, I'll admit), that means everyone but the woman who bought canvasses for her kids shelled out the full 60 bucks. Congrats, children — at least a year of your college tuition is now entirely paid for.

Of course, the graffiti art will have to be authenticated before it is resold. Gothamist put in an inquiry to Banksy's agents at Pest Control to see whether they'll do that, but has yet to hear back. The real shame, though, is that it's entirely possible none of the pieces went to New Yorkers — at least two of the purchasers were from out of town.

The artist — whose real identity is unknown — is in New York on a residency of sorts. He's already made a splash with several pieces produced this month, including a slaughterhouse truck packed with squealing stuffed animals that he unleashed on the Meatpacking District and elsewhere.

His latest stunt will, no doubt, just feed the Banksy craze in the city. There are still a few weeks left to spot new Banskys, or at least the slaughterhouse truck, on the streets of New York. Just don't go out looking for another Banksy sale. The artist said on his website that this was a one-time deal.

More like this
Chris Kaba's Family Continue Fight For Justice After Viewing Police Bodycam Footage
By Sophie McEvoy
These 2 Women Could Be America’s First Lesbian Governors
By Tess Garcia
These 25 Female Governor Candidates Won Primaries & Could Make History
By Tess Garcia
Bustle Daily Newsletter: September 28, 2022
By Stephanie Talmadge
Get Even More From Bustle — Sign Up For The Newsletter