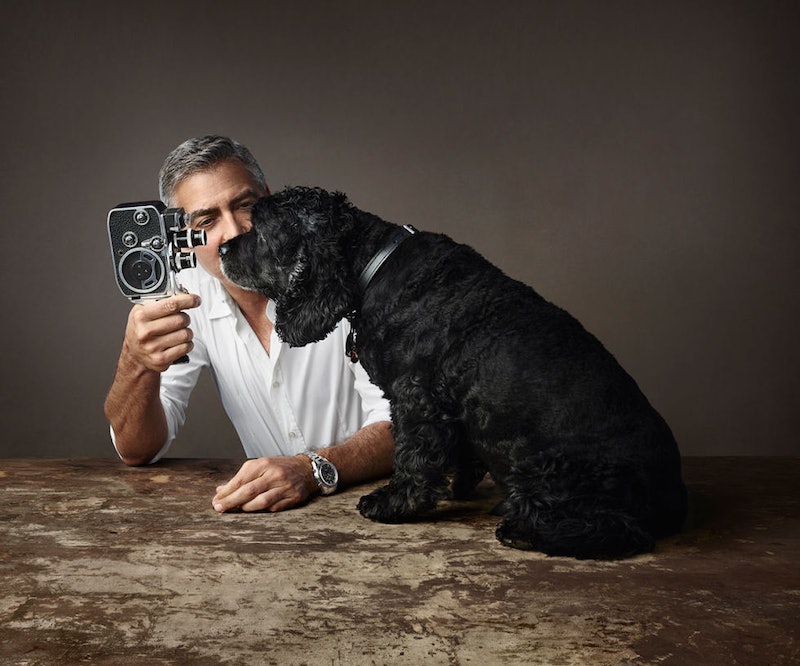 Cute animals should just front every fashion ad campaign from now on, forever. We fell in love with Mansur Gavriel's sloth ads, Choupette Lagerfeld modeling on cars, and now a dog is taking on watches — but he's not just any old pup. George Clooney's dog landed an Omega Watch campaign, and the just released ads are all sorts of adorable. Talk about one star-studded pedigree.

Clooney and his pooch Einstein were named the new faces of Omega Watches, promoting their Seamaster Aqua Terra wristwatch in the new campaign. The ads for the Swiss watch company feature the Oscar-winner alongside his rescue Cocker Spaniel cross, peering into a camera lens (held by Clooney) and snuggling on a wooden table. The actor's face is mostly obscured or down-turned in these ads, so Einstein is the real star, sitting front and center. Clooney even admits, "Einstein has been studying acting for many years now, as you can imagine. I think he's concerned that I am in his shot and he thinks that perhaps you can airbrush me out if it. That's his hope."

You gotta love George for having a sense of humor, and Omega, for getting on the adorable-pets-modeling bandwagon.