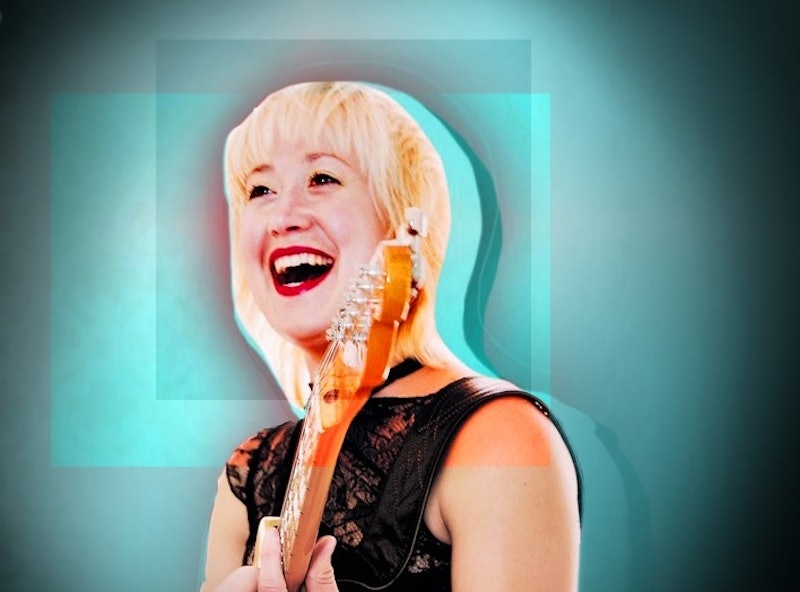 "A band is like a big art project, the music being the core of the project, but the more dimensions that you have dialed as a band, the more interesting for everybody. Album art fashion, and music videos are all part of this." So says Katie Colver, the frontwoman of Cave Clove, a "psych folk pop quartet with roots in Americana" that lives up to its eclectic self-description. I categorize their music as "cheery sound but melancholy lyrics" along with The Smiths, Belle & Sebastian and Architecture in Helsinki. Of course, describing a new musical discovery is never as simple as smashing together the names of other bands — Cave Clove employs plinking honky-tonk piano and rich string accents rarely found outside of bluegrass and down-home country fiddling. The composite effect is an auditory pleasure, refreshingly physical after Lana Del Rey's pulsing synths or Kanye West's crackling hip-hop beats.

My first encounter with Cave Clove was at a street festival in Oakland, California, where Colver played a solo show. I bought their 2013 album Bases of Pyramids for my dad as a Christmas present and loaded it onto my computer before giving it to him. A month later I emailed Colver about an interview to delve into the intersection of fashion and the indie, singer/songwriter world. And now you can read our conversation below (in case, you know, you want to start a super fashionable indie band or something):

(Pictured: Colver on the left and Melissa Kilkuskie on the right.)

Sonya: Can you introduce us to the band?

Katie Colver: There are four of us in Cave Clove. I sing lead vocals and play rhythm guitar, Melissa plays drums and sings backup vocals, Luke Bace plays bass, and Brent Curridan plays lead guitar. Melissa and I do the writing and arranging. She and I have been the heart of the band for almost four years. We've had a couple different bass players and guitar players over that time, all of whom have been awesome, but I must say that Luke and Brent are totally incredible players. They are both full-time musicians. We are all in our late twenties or early thirties.

Sonya: How did Cave Clove get started?

Katie Colver: Cave Clove evolved out of my solo project. I used to perform solo as Katie Clover but would often get other musicians to play with me for certain shows. In 2011, Melissa was one of those musicians, and it just totally clicked. We continued to develop the Katie Clover project as a band together. Then the name changed to Cave Clove in 2012 as a result of a psychedelic revelation in the ocean in Puerto Rico. It is a play on my name, but more moody and visually interesting to have the double "C."

Melissa and I initially met at an epic weekend-long recording session in a cabin in the woods in the snow that a mutual friend of ours organized. We first played together there. We met Luke and Brent through the San Francisco music scene. Luke’s band Big Tree and Cave Clove shared a bill a few years ago.

Sonya: What do you wear in your personal life?

Katie Colver: I have always enjoyed clothes and putting outfits together. I wear a pretty wide variety of styles — really just whatever I’m feeling drawn to on a given day. I try to make sure it’s somewhat interesting or festive — sometimes that happens through jewelry or shoes if the outfit is on the simpler side. I would describe my style as pretty 70s, though now with more 90s stuff in the mix, since that’s back in style and fun for me since I grew up in the 90s. I wear a lot of button-down shirts and high-waisted pants or skirts. Melissa's style is classic tomboy chic and, of course, accessories! She has incredible jewelry and hats, lots of hats!

Sonya: What do you wear onstage, and why?

Katie Colver: What I wear on stage is usually just a louder and fancier version of what I wear day-to-day. More dresses, costume jewelry, more makeup, more heels. I love to dress up and being on stage is a great excuse to do this. Plus, what a band looks like is an important part of the overall aesthetic. We’re going in a Fleetwood Mac direction these days, both musically and aesthetically.

Sonya: What are your makeup preferences? (Feel free to recommend "beauty essentials" if you have any go-to products.)

Katie Colver: I wear pretty light makeup, although dark, smoky eye makeup can be fun on stage. I love red lipstick. I have been a fan of MAC Viva Glam lipstick for like 20 years. Melissa goes for the no-makeup makeup look. She is all about brown eyeliner and red lipstick with an orange hue as they bring out her freckles. Her standards are Maybelline's Great Lash mascara and Kiehl's lip balm. Lately she uses the Revlon Ultra HD lipsticks. And of course sunscreen! The most important beauty cream of all!

Sonya: How do you think audiences respond based on your appearances?

Katie Colver: I think appearances can help demand an audience’s attention. Plus, having a dialed appearance as a band is just a way to deepen and expand the art. A band is like a big art project, the music being the core of the project, but the more dimensions that you have dialed as a band, the more interesting for everybody. Album art, fashion and music videos are all part of this. Bands are, of course, always evolving both musically and aesthetically but I say that at any given time in a band’s career, the more dialed and multidimensional your art is, the stronger.

"It is a very vulnerable thing to perform original music for an audience and it is also a total honor to have an audience."

Sonya: What influence does fashion have on your confidence?

Katie Colver: I feel most confident as a performer when I’m bringing it hard in every way — when I’m present, soulful and totally owning my music and my performance. It is a very vulnerable thing to perform original music for an audience and it is also a total honor to have an audience. I want to look nice for them! Putting energy into fashion and aesthetics adds to the art, and therefore makes me feel like I’m more fully bringing it. Plus dressing up in fun!

More like this
Beyoncé Wore A Golden Sheer Gown At Her VIP Dubai Concert
By Sam Ramsden
Harry Styles Has Become An Accidental Vinted Model
By El Hunt
Cruz Beckham Teased New Music With An Adorable Nod To Mom Victoria Beckham
By Stephanie Topacio Long
"Lavender Haze" Star Laith Ashley Breaks Down Filming With Taylor Swift
By Jake Viswanath
Get Even More From Bustle — Sign Up For The Newsletter
From hair trends to relationship advice, our daily newsletter has everything you need to sound like a person who’s on TikTok, even if you aren’t.