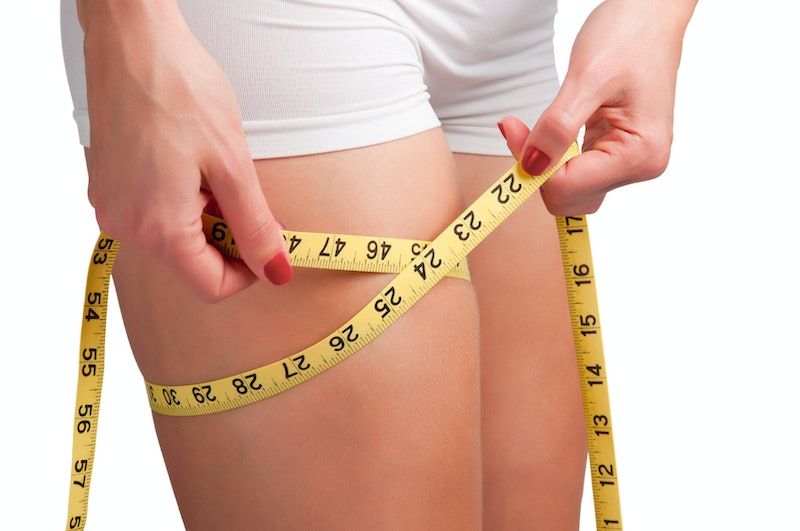 Warning: some individuals may be triggered by the discussion of eating disorders, food restriction, and thinspiration in this content.

As if there weren’t enough pressure on young girls to stay slim, the thigh gap hashtag on social media is creating a new trend from a much older problem — thinspiration. Thinspiration, also called “thinspo,” uses images of very thin women to encourage girls to eat less and exercise more. Unfortunately, though, this often leads to starvation diets and excessive exercise.

“Thigh gap,” or having thighs so slim that they do not touch when standing with your feet together, is the new goal among teenagers who want to be thin at all costs. For most women, a thigh gap is completely impossible to achieve. Clinical psychologist Barbara Campbell told TIME Health & Family that “most women are not built that way — to have that space between their thighs.” Because most bodies aren’t built to have a thigh gap, disordered eating may be the only way to achieve this particular body goal.

Using Instagram and Tumblr, girls use hashtags like #thighgap to share thinspiration and tips on how to attain the elusive gap. Entire Twitter accounts are dedicated to sharing ways to starve yourself — including freezing food so it “takes longer to eat,” and wearing a rubber band around your wrist to “associate food with pain.”

These tips and images, part of the pro-anorexia/bulimia online subculture, have been around for a long time. As a teenager, I remember seeing seeing thinspiration and eating disorder tips disguised as "diet advice" on ancient blogging sites like Livejournal and Xanga. Then, these communities hid themselves more effectively, using keywords like “ana” and “mia” to describe eating disorders and lurking anonymously behind old Tripod websites.

I also remember reading on one of those sites that I could suck on ice cubes to make “my body feel like it was eating.” I look back on that and find it completely ridiculous, but I spent most of high school and college substituting crushed ice for snacks.

The thigh gap trend isn’t new — people with anorexia have been using this and other unattainable body goals to measure their “success” for years. What is different, though, is young girls taking photos of their own too-thin bodies and posting them to social media sites like Instagram for instant approval of their behavior.

When I searched for “#anorexia” on Instagram, a message popped up to warn me that some of the posts could be graphic in nature, and that if I needed more information on eating disorders I could visit the National Eating Disorders Association. Once I've viewed that warning, I can click through to view images tagged with #anorexia.

This seems like a pretty poor way to restrict content that supports eating disorders, considering that they’ve done a pretty good job of eradicating nudity — so much so that breastfeeding moms have been banned.

Pinterest, though, took a more radical approach in 2012. Faced with criticism for thousands of thinspiration boards, the site banned content that explicitly promoted eating disorders or other forms of self-abuse. While a search for #thinspiration or #thinspo on Pinterest also yields a warning message and referral to the National Eating Disorders Association, you aren’t able to click through to view harmful content. Surely there are some pro-eating disorder pins that slip through the cracks, but the site’s proactive approach has significantly reduced the amount of thinspiration.

Just as users have expected social media sites to combat issues like bullying and explicit sexual content, these platforms have an obligation to eradicate content that encourages eating disorders. These posts are harmful enough to adult women, but can have an even stronger impact on teenagers who are already struggling with body image issues.

For me, thigh gap was never really on the table, and I think I knew that deep down. I did, though, use the horrible dieting tips provided by pro-anorexia websites as a teenager, and that contributed to a long-time abusive relationship with food.

More like this
Here’s How To Find Your Spotify Wrapped
By Emma Lord and Emma Carey
Here’s How To Turn On Instagram Post Notifications
By Megan Grant and Alexis Morillo
The Correct Way To Start An Advent Calendar, Explained
By Kaitlyn Wylde and Jay Polish
Here’s How To Make The Spotify Music Festival Lineups Taking Over Instagram
By Alexis Morillo
Get Even More From Bustle — Sign Up For The Newsletter