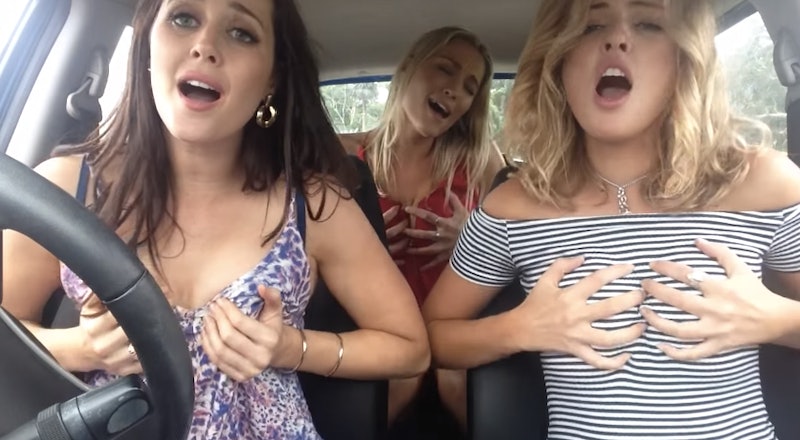 Boob-grabbing is probably the total opposite of what Freddie Mercury had in mind when he wrote this song, but we have a feeling he wouldn't complain about all the boob-grabbing going on in Australian sketch comedy group SketchShe's cover of Queen's "Bohemian Rhapsody". More like "Boob-hmian Rhapsody", am I right? (I'm not sorry.) The girls went with "Bohemian Carsody" for the name of their video instead, given that the cover is filmed entirely in a car, but I still think mine is better. Because the song is so long, the whole thing is sped up, but not quite to manic chipmunk level. And the best thing about it all is the synchronized dance moves the ladies pull off.

I'm sincerely impressed by this kind of ability to execute such air guitar moves in such a confined space. Banging their heads like true rock-stars, for a moment I was worried one might accidentally head bang into an airbag and set it off. ("Worried"..."hoped"...whatever.) But like true professionals, the women make it through without incident. Maybe this will start a new trend in car-cover songs. If so, we're suggesting the girls cover The Cars, because obviously. They've already done a car cover of "Baby Got Back", so it's clear they have range. Watch the cover of "Bohemian Mammary" below:

The girls are funny, but still, they haven't got anything on Wayne's World:

More like this
Bustle Daily Newsletter: September 28, 2022
By Stephanie Talmadge
Here’s Your Daily Horoscope For September 30, 2022
By Mecca Woods
26 Ghost Story Podcasts To Get You Ready For Halloween
By Jessica Booth, Mia Mercado, JR Thorpe and Emma Carey
Angel Number 333 Is All About Self-Love & Alignment
By Brittany Beringer and Kristine Fellizar
Get Even More From Bustle — Sign Up For The Newsletter