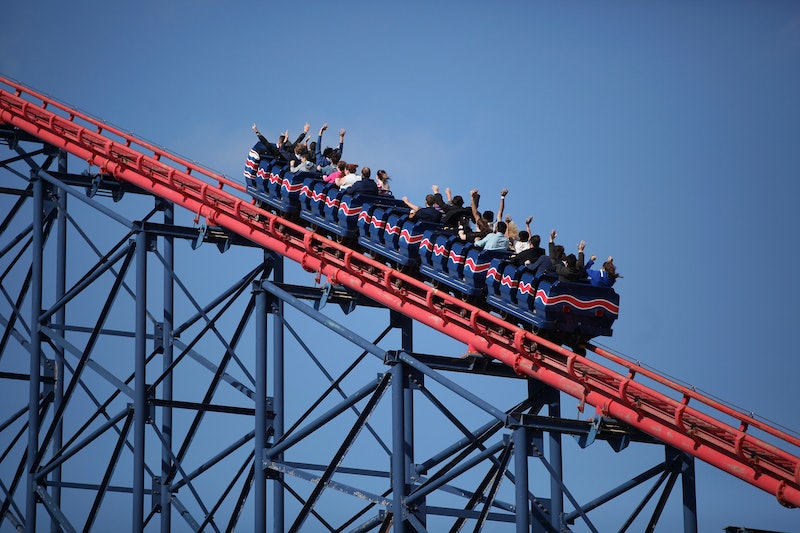 I'm not gonna lie, guys, I had no intention of actually watching The Emperor's New Groove when it came out in theaters. My main priority was watching the nifty roller coaster simulation preview, and there is a direct correlation between AMC pulling that out of rotation and me never going to the movies again. But now that Carowinds has released a simulation of its Fury 325 roller coaster, I no longer have to feel the full force of my bitter resentment, because I can live the magic all over again on what is being heralded as the tallest and fastest "giga" roller coaster in the world.

The park itself is based 12 miles outside of Charlotte, N.C., and won't actually open until March 27, so all you masochistic thrill seekers and wannabe Quidditch players will have to wait until then to experience the real thing. The timing could not be more perfect for Spring Breakers, although fair warning: 81 degree drops at 95MPH are more than enough of an invitation for the universe to send your bikini top flying. (Eh, if you've got it, flaunt it.)

For some perspective on how tall this bad boy is, consider that its 325 foot height is over sixteen times the size of the average two-story home. You know, if a two-story house were winding and whiplashing and possibly trying to stop your heart from beating. Here's the simulation from the camera that took a rise a few days ago (hold on tight!):

The Fury 325 is one of seventeen thrill rides the park will feature, including something called the "Scream Wheeler" that you'd have to pay me a large sum of money to attempt. While it is unclear exactly where it ranks because of different categorizations of roller coasters, we do know that the Fury 325 is at the very least in the top five of the tallest roller coasters in the world. It may only be a matter of time before it ends up joining the ranks of the ten best-rated roller coasters in America (although someone else is gonna have to let me know, because I'm a big ole chicken).

No matter what your level of roller coaster badassery is, though, at least you will be able to conquer it much more easily than this roller coaster that was literally designed to kill you. It doesn't exist (YET), but some engineers with way too much time on their hands figured out the g-forces would cause a lack of oxygen so severe that you would black out within a minute and be super dead within another. Are you brave enough to watch?

If you're reading this, I assume you survived, and are more than ready to conquer the likes of Fury 325. Go forth and thrill ride, guys.

More like this
10 Stranger Things-Inspired Halloween Costumes For True Fans
By Emma Carey
Deliveroo Is Selling Lotus Biscoff Cinnabons Now
By Darshita Goyal
6 'Game Of Thrones' Halloween Costumes That Aren't Overdone
By Nina Kahn
The 50 Most Powerful Characters In The Marvel Universe, Ranked
By Johnny Brayson and Nola Pfau
Get Even More From Bustle — Sign Up For The Newsletter