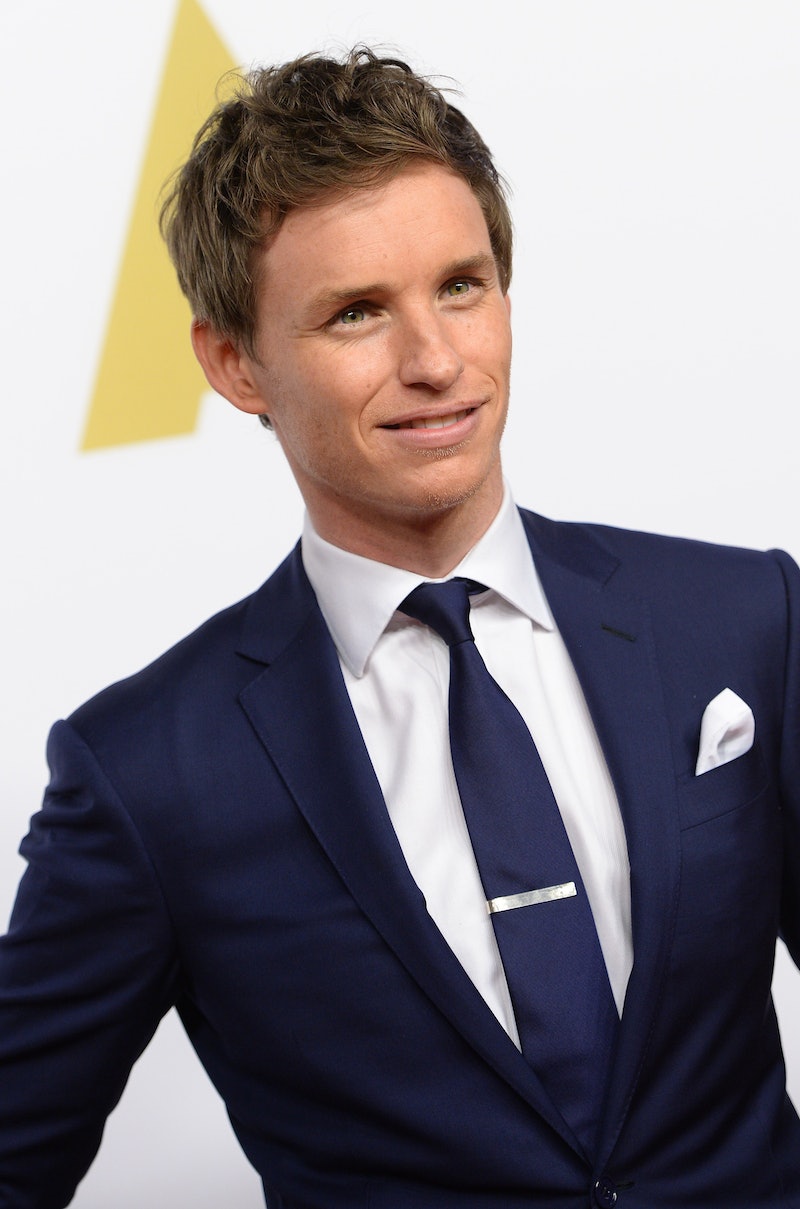 Maybe you hadn't noticed, but Eddie Redmayne is having a banner year. The 33-year-old actor has, in a period of about two months, become a man in the market for a trophy case after earning a Screen Actor's Guild Award, a Golden Globe and an Oscar for his portrayal of Stephen Hawking in The Theory of Everything . Redmayne has also stolen the admiration of any person who has been paying attention with his adorably humble and awkwardly charming personality, heartfelt acceptance speeches and innocent, British school boy excitement over both his meteoric success and recent marriage to long-time girlfriend Hannah Bagshawe. So, if you're keeping score, all the points as of late go to the London native, making him the front runner for Hollywood's new leading man. And fans aren't the only ones wearing rose colored Redmayne glasses — it seems movie makers are just as impressed with his skills as the general public is with his wit, plucking him to once again transform himself when he takes on the role of a transgender woman in The Danish Girl.

As you may expect, Redmayne's casting as a transgender woman hasn't come without its controversy, the criticism pointed not at the Oscar winner himself, but rather at the casting director for overlooking the community of transgender actors in the business. While the decision to hire a male actor instead of an actual transgender woman represents an ongoing inequality, it should not affect our opinion of Redmayne's upcoming performance — after witnessing his complete transformation into a man with early onset Amyotrophic Lateral Sclerosis (ALS), we know his dedication will undoubtedly lead to a moving and impressive interpretation. And if anyone was having doubts about Redmayne's ability to make this physical transformation, the first photo of him in character as Lili Elbe, the Danish artist born as Einar Mogens Wegener in 1882, is nothing short of stunning.

While Eddie Redmayne is certainly a GQ poster child and swoon-worthy British man, he is also stunning in the role of Elbe. The actor boasts many characteristics that have long been considered markers of female beauty.

He is like a real life Snow White, minus the dark mane, with lips as red as blood and skin as white as snow. The actor's alabaster complexion, reminiscent of present day beauty icons like Julianne Moore, is almost pearlescent against the chestnut hair — locks that highlight his freckles, making them more pronounced in a way that causes his face to nearly glow. Redmayne's illuminated skin also provides the canvas for an already perfect pout to make a transformation of its own. The actor is known for his charming smile and unique mouth, and bold red lipstick highlights the symmetry of his lips while creating a contrast that evokes old Hollywood glamour.

The Londoner has more than just illuminated skin and a pretty pout, though. With curls that now swoop past his forehead and land midway down his face, we also notice that he has a bone structure most people would kill for. His high cheekbones give him what make up artists everywhere spend a great deal of time trying to contour. Also, male or female, those dimples don't hurt. Redmayne is already recognized for his dazzling, light-up-the-room peepers, but our first glance at him as Elbe shows that his stare takes on a warm, pensive quality perfectly suited for a character who is in the midst of emotional growth.

If you would have told me during awards season that Eddie Redmayne's turn as Lili Elbe would be stunning enough to give his real life, pretty boy self a run for his money, I would have brushed you off while continuing to be sucked in by his British charm. Yet, a few short months later, in the aftermath of a success storm that has barely settled, it is undeniable that Redmayne's Elbe is a striking one. If this is merely his physical transformation, I for one cannot wait to watch the emotional performance — he is quickly becoming the transformative king of the silver screen. I hope he built a big enough trophy case.