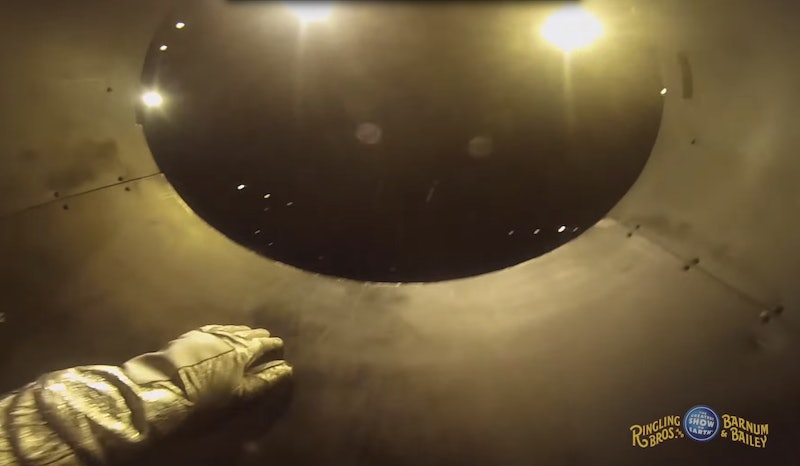 Did anybody else watch that episode of Madeline where she and Pepito straight up ran away to join the circus? Nineties kids have been harboring secret desires to do the same ever since, and watching an actual video of how it looks to be shot out of a circus cannon has brought it back stronger than ever. The acrobat who filmed it is 25-year-old Gemma Kirby, a performer with the Ringling Brothers Circus who happens to be the youngest female human cannon baller in the world, and also the physical representation of all my new #LifeGoals.

Getting thrown out of a cannon may look pretty simple, but there's some serious business involved here: Gemma gets shot up 40 feet in the air to hit a target 104 feet away, and while it's happening she is experiencing a g-force that is seven times the normal force of gravity. She reaches speeds over 60MPH, essentially crushing the Rihanna lyric "zero to sixty in three point five" by hitting that acceleration right off the bat (so shut up and dive?).

"It's a very intense sensation. Very few human beings get to feel that sensation, except for fighter jet pilots or an astronaut," Kirby said of her completely awesome job.

And here is the moment of blast-off, just in case you missed it:

Because I can't think of anything more romantic than getting flung into the perilous air, Gemma recently celebrated her 500th cannon ball flight this past Valentine's Day. She shared the moment on Instagram, along with a ton of other cool insider pics of her days traveling with the circus.

Here's an excerpt from the circus with all of her cannon ball stats:

Kirby has been nicknamed "The Jet" by circus pals. Here she is getting ready to rumble:

And just casually owning the beach with some profesh-level acrobatics:

She says she hopes to get to 1,000 cannon ball shots before the end of this two year tour, which means she'll be blasting out more than once a day. With skills like these, though, I have no doubt it is a feat she'll be able to accomplish. Here she is sticking the landing:

And Team Rocket made it look so darn easy.