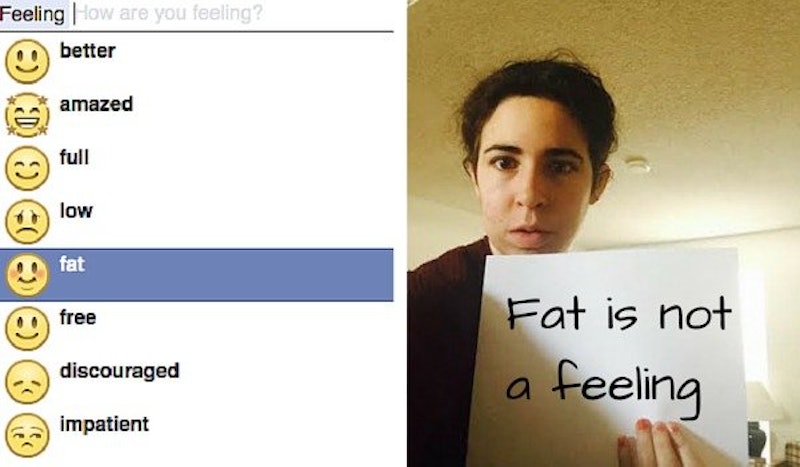 I bet that you've said you were "feeling fat" at least once in your lifetime. Maybe it was while trying on some form-fitting clothing, maybe you woke up feeling bloated, or maybe you just demolished a Chipotle burrito and your stomach was finally catching up to you. You probably moaned the phrase aloud to your friends to solicit sympathy or compliments assuring you that the opposite was true. But perhaps you have body dysmorphia or an eating disorder and the feeling lasts a little longer than a fleeting few moments, causing mental anguish and physical harm. Or maybe you're actually just a fat person who's feeling really present in their own body and in a good mood about it.

The phrase "I feel fat," is a really complex one: That's why the groups asking Facebook to remove "fat" from their "feelings" emojis are getting mixed feedback. Catherine Weingarten, who started the petition against Facebook, says that she has struggled with an eating disorder and that this status option feels to her like a lessening of the experiences of people with EDs. "When Facebook users set their status to ‘feeling fat,’ they are making fun of people who consider themselves to be overweight, which can include many people with eating disorders,” the petition reads. “That is not ok. Join me in asking Facebook to remove the ‘fat’ emoji from their status options.”

I understand what Wiengarten is saying and see how in cases such as the ones she's talking about, the "fat" emoji could seem to be taunting people who struggle with thoughts about their body size. I'm also not a fan of the option because — as a fat woman — it takes away from some of the other work that body positive and size-acceptance activists have done around being able to use the word fat as a positive or affirming identifier. Spoiler alert: "Fat" is generally not used in an affirmative, positive way — especially not when being utilized by people who aren't fat to describe how they feel about their bodies.

When people who aren't actually fat get to use the word in a derogatory manner or to describe their momentary feelings (rather than the people who are/identify as fat and live in a fat body every day getting to choose how they'd like to refer to their stigmatized figure), it's a little upsetting. When I hear someone say, "Ugh, I feel so fat and gross in this outfit," when they're feeling bad about the way they look or how their body feels, I'm ultimately being told that my body is "gross and uncomfortable." And that is not okay. But when I say I'm "feeling fat," it means that I'm being present in my body and feeling positive about it, just the way that it is. Kinda like this:

But definitely not any sort of way that makes being fat a bad thing. While I am definitely not a fan of anything that's emotionally or psychologically triggering to people, I wish that being fat wasn't seen as some of kind of definitively bad thing. With Facebook unrolling new suicide prevention features to help people step in when they think a friend could be struggling with suicidal thoughts, perhaps the "feeling fat" emoji or any negative self-talk should be a sign to reach out to people instead of laughing along at the double-chinned emoticon.

While Facebook hasn't indicated that they have any plans to remove the option from the drop-down menu, perhaps they could reach some sort of compromise that allows users to "block" it and not have to see it, should it pop up in their news stream or the profile of a friend. There's one thing that I think we should all be taking away from this, regardless of how we feel about the calls to get rid of this "feeling": We need to be more considerate about how we engage in "fat talk." Discussing our insecurities and being honest about our body image is so important in being able to combat negative self-image, but it should never come at the expense of people who have eating disorders or who have stigmatized bodies. Words mean things and we should sometimes pick them more carefully.