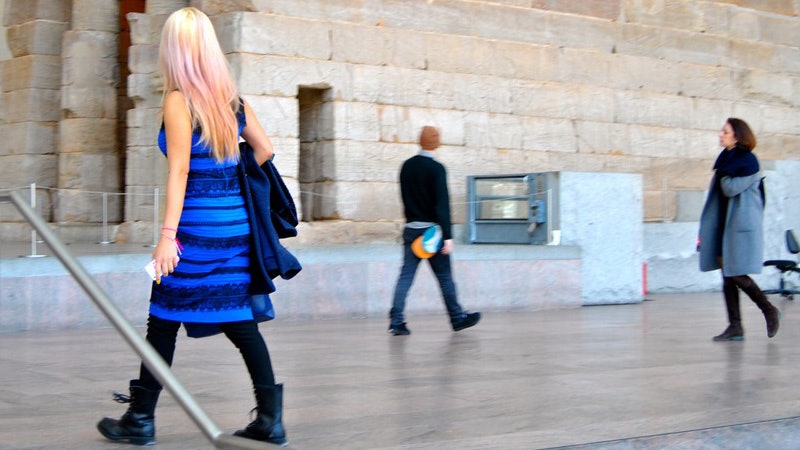 I've loved dresses my whole life. My one-piece style doesn't follow trends for the most part; it's all about owning whatever I like for any given occasion. If I could, I'd wear all types all the time — mini, maxi, LBD, you name it. But what about trending? You may have been under a rock if you didn’t decide what color The Dress seen around the internet actually is. It freaked everyone out and humans are still talking about the "optical illusion." So I decided to find and buy the one everyone's been talking about online to take it out on the town in real life.

For the record, I was Team White and Gold when this all began, but The Dress is clearly described as black and blue on retailer Roman's drop-down menu. Thankfully, viral fame has not yet changed the price tag. For under $100, I was sold.

On a weekend morning, I arrived at The Metropolitan Museum of Art in New York City and silently sauntered through the galleries. I posted a far-away photo without revealing any details on social media — but a follower recognized it straight away. It’s crazy to think that the design has become so ubiquitous, like a Van Gogh masterpiece hanging on the walls of the museum. Our guide even made an announcement that I was wearing The Dress.

“I knew it,” someone in the group muttered as she snapped a picture with me in front of some great works of art for Twitter. And while the Tweet will last forever, I know this moment and the popularity of the dress will fade with time like the slow color shifts on the canvases.

In the afternoon, I made my way towards New Jersey for a friend’s baby shower. Even though I had my coat on, a little girl on the subway mouthed to her mom, “That’s The Dress from TV.” It’s amazing how even eight-year-old London could clearly spot a trend. I asked her if it mattered what color The Dress actually was, and she shyly shook her head. She just thought it was pretty, and I agreed.

As I arrived at my next destination, I was a little worried that my dress might be pretty distracting — so I kept a cardigan on as the afternoon wore past. After all, I was there for the baby bump, though I couldn't help the controversial dress from becoming the conversation dress.

"Is that the Dress," people pointed and wondered aloud multiple times. (So this is what it feels like to be the center of attention...) I nodded and found it it funny how passionate people still were about what they initially saw versus their reaction to what was standing in front of them in real life. It reminded me of other divisive decisions we’ve had to make through the years: Backstreet Boys or N’Sync, Team Jolie or Team Aniston?

There came a point where I didn't want people to stare at me (being the center of attention grows old). But the comments didn't waver. I was even told that the lace-trim looked good on me, whilst the garment was mistaken as a Tadashi Shoji.

"I thought it looked familiar," another lady proclaimed, noting that she had something similar in her closet. But it wasn't just the women. The men present were just as aware of (and opinionated about) The Dress. There didn't seem to be a gender or age difference in deciphering whether "he or she" saw black and blue or white and gold. I met a professional photo shopper who tried to explain the scientific trickery of pixelation change to me. And it turned out there was at least one person there who somehow missed the memo and the appearances of The Dress on Ellen and American Idol. We showed her the original post that went viral. She exclaimed "white and gold," then looked at me without changing her answer to “dress gate.”

“The Dress was a hit,” my best friend added as people took photos of me while I wasn’t looking. (I hoped my posture and posterior were well-documented.)

Post-baby shower, I had one more round of "dressing up" to do for an evening occasion. As I tiptoed down the subway stairs, I couldn't help but feel like Cinderella. Two girlfriends whispered as I walked past them, waited a second, then followed me and asked to take a picture. I was a celebrity with this immediate recognition.

Once at the party, a couple admitted that the dual color of The Dress is the only thing they’ve ever agreed on; a husband and wife said with relief that they’ve been bitterly arguing about it for the past few days.

It's difficult not to compare The Dress to a football team allegiance — a debate that can yield both powerful splitting or unification. It makes an entrance, as any good outfit can. So maybe it is doing more than making a statement.

There's been so much hoopla and silliness surrounding this "controversy," but now the brand behind it is putting up a white and gold version to be auctioned off for charity. And The Salvation Army is using the hashtag to raise awareness of domestic violence, a far more important and serious issue.

As for myself, I remain a symbolic meme — in the fabric, I spun myself as current cultural currency for a day. But I'm still a big promoter of letting your personal style speak for itself and for speaking up when your voice can make a difference.