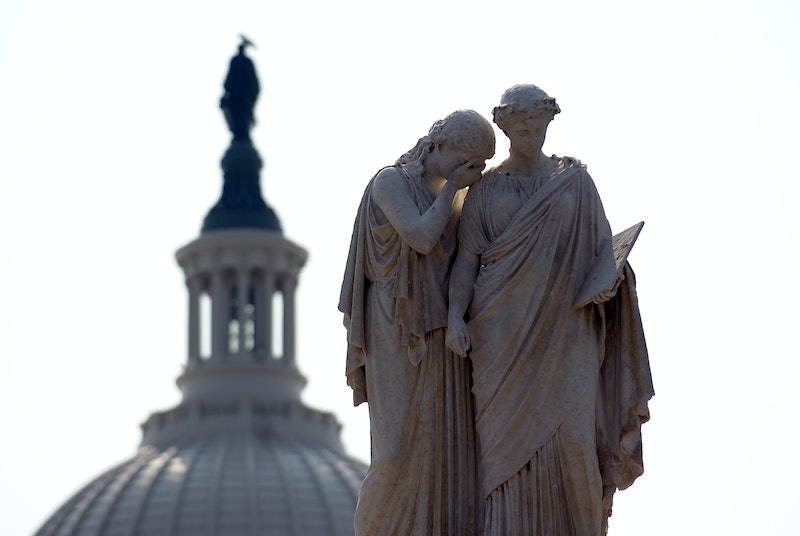 Time is running out. President Barack Obama said Monday that the United States has "a good chance of defaulting" on its debt if Congress doesn't get its act together and pass a government funding bill and an extension on the debt ceiling, which is set to be reached by Thursday.

"House Republicans continue to think that somehow they can continue to extract concessions by keeping the government shut down or threatening default," Obama said. And yet the president acknowledged that some GOP members have realized that "it’s not tenable, it’s not smart, it’s not good for the American people to let America default." (Those members he's referring to are mostly in the Senate, and have been criticizing Ted Cruz and working on the issue for days.)

From the start of the government shutdown, the specter of the the debt ceiling hung in the distance — a far away October 17. Now that date is less than three days down the road on Thursday, Washington leadership more and more worried about getting the House GOP to sign on to a deal.

Earlier today, Congressional leaders had a meeting on the books with the president for 3 p.m this afternoon. But the meeting was postponed, in order to give leaders more time to strike a deal. (Markets slipped after the announcement — a reminder that a debt ceiling breach Thursday will be disastrous.)

Senators Harry Reid and Mitch McConnell appear to be closing in on a deal that would open the government until Jan. 15, and would push the debt ceiling debate all the way down to Feb. 15 — though there's no guarantee that such a bill would clear the House. The spending cuts of the sequester are also scheduled to hit on Jan. 15, almost ensuring another battle down the road.

But the Washington Post reports that the two senators actually don't like each other, and that their interpersonal animosity is likely to be a hurdle to any deals they strike. McConnell, who is reportedly facing a contentious race in his home state, is reportedly suspicious of any deals. (We're guessing a Post article about this probably won't help their relationship either.)

"I’m very optimistic that we will reach an agreement that’s reasonable in nature this week to reopen the government, pay the nation’s bills and begin long term negotiations to put our country on sound fiscal footing," Reid said Monday, a sentiment echoed by McConnell.

As the shutdown continues, Republicans are taking most of the heat for the consequences and the looming debt crisis. This gives Democrats little incentive to agree to their demands, many of which have already been rejected by the president. "What goes around comes around and if they try to humiliate Republicans, things change in American politics," warned Republican senator and failed presidential candidate John McCain.

Talks between Obama and House GOP leaders made little progress last week, and a deal by Republican Senator Susan Collins was rejected over the weekend.