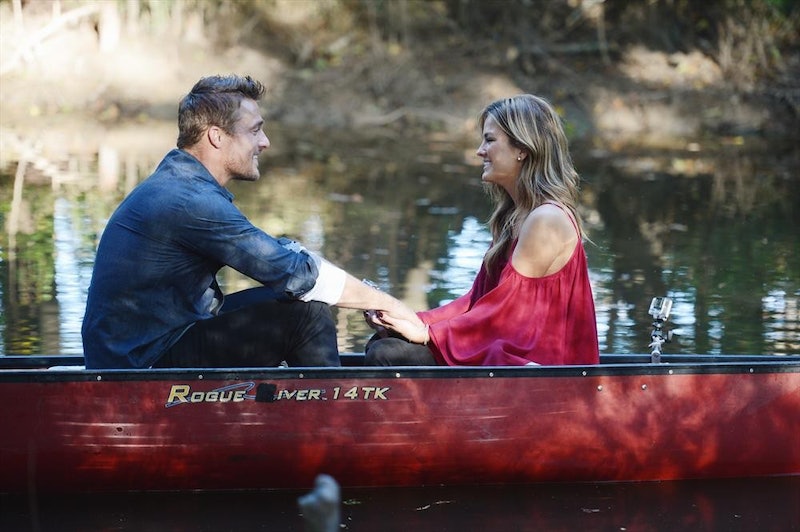 If you're a reality television disciple, chances are your DVR is set to ABC for 8 p.m. tonight, when millions of ardent viewers will watch as a couple begins their storied journey to the altar. During The Bachelor season finale, agriculturalist Chris Soules will choose to settle in rural Iowa with healthcare worker Whitney Bischoff or chiropractic aid Becca Tilley. Many viewers will tune in tonight to take part in the tears, laughter, and what will hopefully amount to a profound proposal, but a small subset of spectators have different objective in mind: Breaking out a pen and paper to furiously take notes on the episode's fashion. Unlike the wares featured on House of Cards, which are befitting an elegant head of state, or the wardrobe of Once Upon a Time, which primarily suits Disney characters, the clothing featured on The Bachelor's contestants often have real life applications and price tags that don't cause a season finale-worthy swoon. Though full-length gowns and costume garb occasionally make their way into the mix, the everyday ensembles of the show's cast consists of aesthetically pleasing high-low pairings with a surprising amount of quirk.

Tonight being The Bachelor's season finale, viewers can expect Bischoff and Tilley to dust off their finest wares in anticipation of a proposal. And courtesy of a teaser clip from ABC News itself, audiences have already received a tantalizing glimpse of what the duo will sport during their final rendezvous with Soules. Prepare to be dumbfounded, because Bischoff and Tilley's gowns appear to be the most subdued of the season — and perhaps the most understated of any season yet.

Bischoff's ebullience is often reflected in her wardrobe, as evidenced by the nurse's graceful, lime-hued maxi dress in Episode 10; however, her finale gown is a restrained, off-the-shoulder black column with ruching at the neckline and a slim silhouette. Perhaps Bischoff's wardrobe stylist wished to convey the gravity of the occasion or Bischoff's commitment to Soules, but the gown is quite a departure from the season's previously blithe spirit. Could it be that The Bachelor is taking its sartorial direction from House of Cards' Claire Underwood after all?

Tilley's gown is equally solemn, a richly hued oxblood number with a Victorian silhouette and minimal detailing. I applaud the chiropractic assistant for her Pantone-approved usage of marsala, but the gown itself is extraordinarily pared-down for a finale ensemble, let alone one featured on a show previously saturated with every manner of bling under the sun.

Are The Bachelor's producers attempting to make a political statement about excess versus minimalism? Are Bischoff and Tilley's unadorned gowns a nod to Soules' simple, pastoral lifestyle in Iowa? In either case, bless jeweler Neil Lane for his glittering contributions to the understated finale ensembles; after all, who needs a heavily embellished ensemble with one of Lane's sparklers on her left hand?