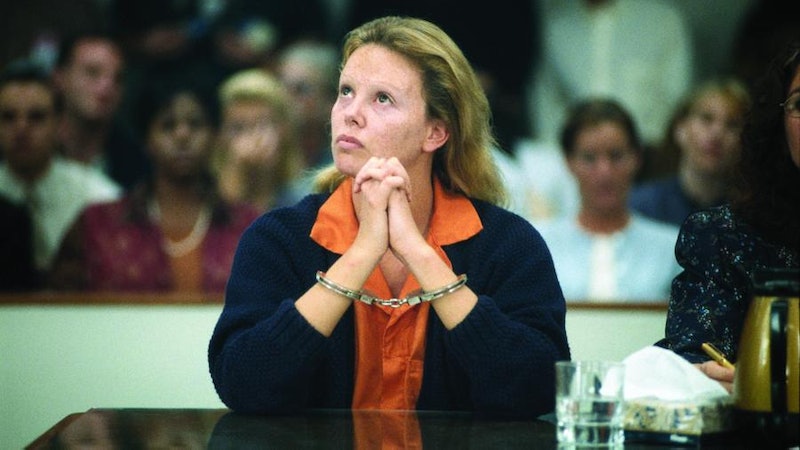 You guys already know (largely thanks to the Halloween season) that one of my weirder hobbies centers around creepy stuff: Reading and collecting weird and freaky stories, whether they're real, fictional, or somewhere in between. As such, it probably doesn't surprise you that I find this study about female serial killers fascinating, if also a little terrifying. Led by Marissa Harrison of Pennsylvania State University, it discovered the main difference between how female serial killers, or FSKs, and male serial killers operate — something which hitherto hasn't been examined.

Since most studies previously conducted about female serial killers have had relatively limited sample sizes, Harrison and her team sought to widen the frame and get a look at the bigger picture. According to the Washington Post, Harrison defined “serial killer” as “anyone who kills three or more people with a 'cooling-off period' of a week or more between each murder.” Using Murderpedia as starting point and mass media reports to verify their identified killers, the researchers examined the demographics, motives, methods, mental health, and victim characteristics for 64 FSKs operating in the U.S. between the years 1821 and 2008. According to the British Psychological Society's Research Digest blog, the total number of victims between all 64 FSKs was 311; on average, they killed six victims each.

Here's what the data revealed:

The fact that women primarily kill for power or money is of particular note. As Harrison put it to the Washington Post, “Female serial killers gather and male serial killers hunt. That was very interesting to me, as an evolutionary psychologist, that it reflects kind of ancestral tendencies.” It lines up, too, with what a 1995 study found about male serial killers — that is, that the majority of them sexually violate their victims. Evolutionarily speaking, women have traditionally behaved in such a way as to ensure their survival; men, on the other hand, operate on the principal that ensures the survival of their genetic code. So, when it comes to serial killers, it's perhaps unsurprising that women kill for resources, while men kill for sex.

So what do we do with this information, besides use it to keep ourselves up at night? I'll admit that I'm not entirely sure. Maybe we squirrel it away for whenever we need it — or we incorporate it into our daily “watch out” habits. The other thing that Harrison and her team found is that FSKs tend to get away with their crimes for a lot longer than male serial killers do; people apparently have a hard time believing these White, educated, attractive, caregiving people are capable of murder. I don't mean to make you paranoid or anything, but, well… not everyone is always what they seem.

Take, for example, these seven female serial killers, or these historical ones below:

The earliest FSK featured in the study's data set, Patty Cannon kidnapped slaves and free blacks in the early decades of the 19th century; she and her gang were indicted in 1822. In 1829, however, it was discovered that they had also killed at least four people: Three children including an infant and one adult male. It's unclear whether Cannon was convicted and sentenced to death; she ended up dying in her cell on May 11, 1829, though. Again, we're not totally sure how it went down, but it's believed she either died from natural causes or committed suicide by poisoning.

In 1901, Toppan, a nurse born as Honora Kelley and known as “Jolly Jane,” confessed to committing 31 murders; she did her patients in with poison. When she was finally caught, she won an insanity plea and was incarcerated in the Taunton Insane Hospital in Taunton, MA until her death in 1938.

Born Nancy Hazel in 1905, Nannie Doss killed 11 people between 1920 and 1954. Her primary motive was life insurance money; however, she later on said that she was “searching for the perfect mate, the real romance of life.” All in all, she poisoned four husbands, two children, her two sisters, her mother, one of her grandsons, and one of her mothers-in-law.

You'll probably know this one from American Horror Story: Coven. A lot of the rumors of exactly what Delphine LaLaurie did to the slaves she kept in her New Orleans mansion in the 1800s may have been embellished over time; however, we do know that a fire in the residence in 1834 resulted in the discovery that she had been brutally torturing the slaves. Bodies were later discovered having been interred in the yard. It's believed that LaLaurie fled New Orleans after the truth about her came to light… although we're not totally sure. Records show that she died in Paris in 1849.

More like this
This Psychological Effect Might Be Keeping You From Hitting Your Goals
By Lexi Inks
What Reporting On The UK’s Most Prolific Cyber Stalker Taught Me
By Sirin Kale
26 Ghost Story Podcasts To Get You Ready For Halloween
By Jessica Booth, Mia Mercado, JR Thorpe and Emma Carey
15 Easy Pranks To Play This Halloween
By Emily Kelley and Lauren Grant
Get Even More From Bustle — Sign Up For The Newsletter