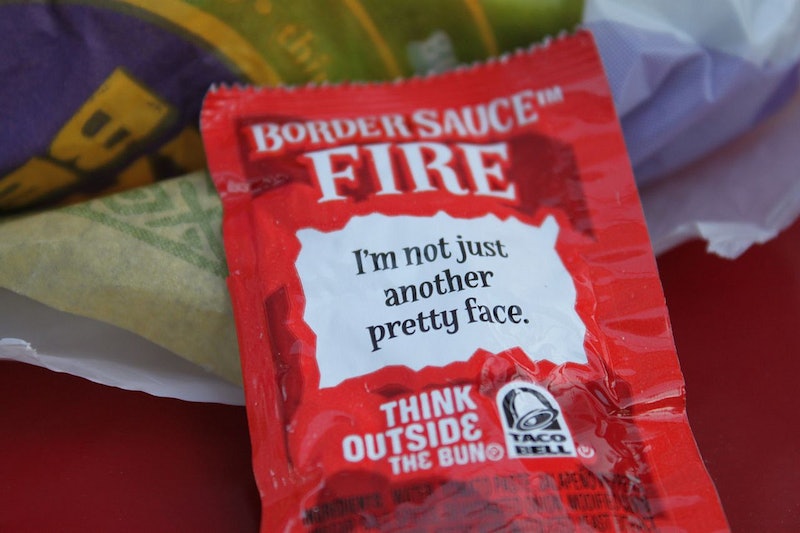 And the latest fast food rumor to sweep the Internet is this: Taco Bell Fire sauce-flavored tortilla chips. They might be coming, and soon. While this news might have Taco Bell and junk food enthusiasts everywhere salivating, though, I'll be honest: All I can think is, why did this idea take so long? I mean, in the grand scheme of Taco Bell merchandise, chips flavored like their hot sauce is kind of a no-brainer right?

The intriguing, yet probably easy-to-fake image seen here first began making the rounds after being posted to Reddit four days ago. Wrote Redditor Droogeh, “My friend who works at corporate Taco Bell grabbed me some not yet public Taco Bell hot sauce tortilla chips,” with the accompanying photo featuring a tiny-looking tortilla chip held up next to a bag that looks like a gigantic version of a Taco Bell hot sauce packet. Oh, and apparently we don't have to worry about the aforementioned friend losing his or her job over the image; clarified Droogeh some ways down the thread, “I asked before hand [sic] to post it, if my buddy said no way I wouldn't have posted it.” Bonus points for watching your buddy's back, Droogeh.

I know, I know — where's the picture already? Here you go:

The big question, though, is this: Are Taco Bell hot sauce tortilla chips going to be a thing in their own right… or are they going to be a new Doritos flavor? Commenters in the Reddit thread seem a little divided; one wrote, “I'm surprised Doritos isn't throwing a fit right now since this is direct competition basically,” while another sensibly replied, “Plot twist: Taco Bell is doing a royalties deal and it's actually fucking Doritos.” It's worth noting that Doritos and Taco Bell are, in fact, owned by different companies: PepsiCo owns Frito Lay, which in turns own Doritos; Taco Bell, on the other hand, is owned by Yum! Brands. However, given the success of the Doritos-Taco Bell partnership from a taco standpoint (hey there, Doritos Locos Taco!), it would be unsurprising if the next leg of the deal resulted in Taco Bell Hot Sauce Doritos. We've already got Doritos-flavored tacos, so why not Taco Bell-flavored Doritos?

That's all speculation on my part, though, so do with that what you will. Taco Bell has yet to respond to the rumors, so for now, assume that the chips may or may not be happening. If you really can't deal with the uncertainty, though, you can always go buy yourself a bag of regular tortilla chips and some bottled Taco Bell hot sauce and have at it — or, y'know, just pick up an extra handful of Fire sauce packets the next time you go to Taco Bell. That works, too. Happy snacking!

More like this
On TikTok, Tinned Fish Date Night Is The Latest Viral Food Obsession
By Emma Carey
10 Pumpkin Recipes That Are Way More Creative Than Pie & Lattes
By Rebecca Deczynski and Alexis Morillo
Why TikTok Is Flooded With Controversial Videos About "Pick Me Girls"
By Courtney Young
This TikTok Song About An Unrequited Romance Has FYPs In Shambles
By Emma Carey
Get Even More From Bustle — Sign Up For The Newsletter