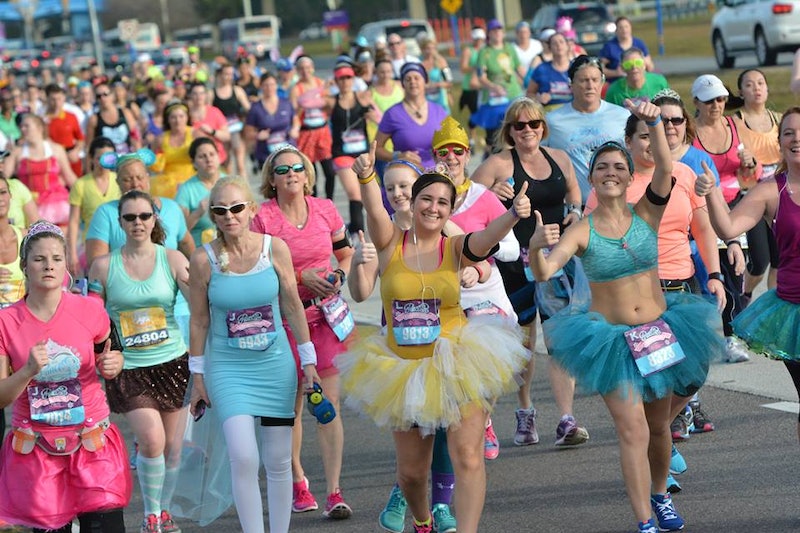 You love running, and you love Disney princesses, but did you know that you can combine your two loves into one awesome race? If you really are obsessed with all things Disney, you probably know what I'm about to tell you already, but for everybody else, here it is: you can dress up in a tutu or as your favorite princess (or not at all, your choice) and run in the Princess Half-Marathon at Disney World. That just might be adorable enough to get me to run 13.1 miles. But probably not, I've never even run a 5K (I KNOW, OK?).

Here's the lowdown on this awesome event: it takes place at the end of February — you have 345 days to get your butt and, let's be real, your costume in gear before the next one. Last month, there were over 49,000 people who had signed up for the weekend of races, and just to put that in context, the New York Marathon had 50,896 people register last year. Pretty cool, right?

There are so many things that make this event awesome. Let's break it down.

Every year, Disney puts on two female-focused runs: the Tinker Bell Half Marathon in California, and the Princess Run in Orlando. Of the people who signed up for the princess run, over 90 percent were women. Men are allowed to run, but they're not the focus of the event, meaning that the ladies really get a chance to shine.

2. It's accessible to all

OK, I know that sounds kind of contradictory because I just said it was focused on women, but what I mean is women of all ages and skill levels are encouraged to run. In fact, over half of the runners are first-timers. So don't let intimidation get in your way! There's also a Disney Princess 5K and a Disney Princess Enchanted 10K if you're not into the full half-marathon.

3. It's big on philanthropy

Full stop. How sweet is that shirt? I think I just teared up a little. Anywho, there's a big focus on philanthropy at the run — many women are either sporting charity shirts, or are running for themselves or a loved one. What I think is especially powerful is that the run is not designed for just one cause — you can run for whomever and whatever you have a connection to.

First of all, you're at Disney World. Second of all, there are tons of awesome events sprinkled throughout the weekend, like two Pasta in the Park parties and a Happily Ever After Party at Downtown Disney.

5. Everyone gets a medal

Everyone who participates goes home with a medal, regardless of placement or time. There are special awards (like the Glass Slipper Challenge, which is given to runners who participate in more than one race over the weekend).

Registration for the Disney Princess runs starts July 14th, and it will sell out in advance. In the meantime, you can buy tickets for November 2015's Wine and Dine Half Marathon — tickets go on sale March 17th.