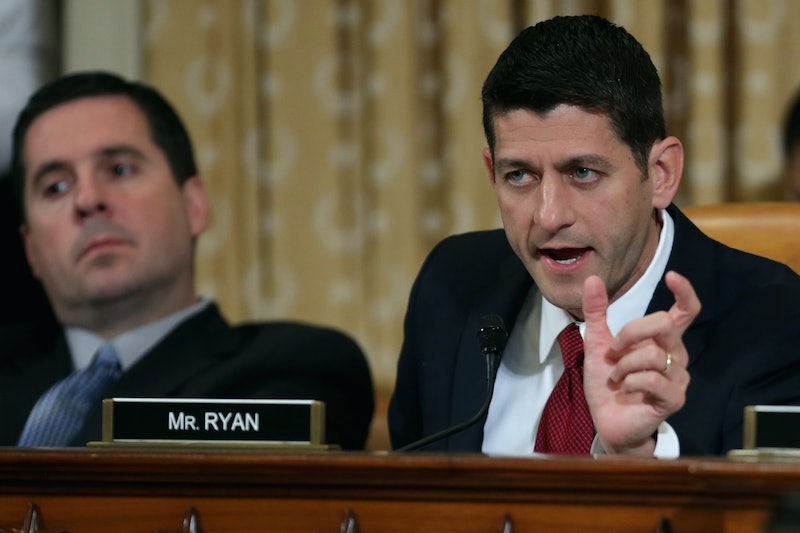 Don’t worry, ladies — even as the U.S. government teeters dangerously close to a Thursday default date, Paul Ryan (R-Wisc.) is deeply concerned about your access to birth control. Or lack thereof. The Republican from Wisconsin (what a movie title) and his icy blue eyes are gunning for a “conscience clause” for Obamacare, which would allow employers to opt out of providing women with specific medical provisions. Which means that if an employer objects for religious or moral reasons, women could be denied birth control, yearly doctor visits, or domestic-abuse counseling.

The GOP tacked the clause onto legislation nearly two weeks ago that looked to push Obamacare back by a year to prevent a shutdown — which obviously failed. From there, the clause thankfully seemed doomed.

Oh, except Romney's 2012 teammate is still stringently backing it. Why? As shutdown negotiations broke down over the weekend, Ryan, the House Budget Committee chairman, rejected a compromise proposal that would extend the debt limit through Jan. 31. Citing “two Republicans familiar with the exchange,” The Washington Post reports that “Ryan argued that the House would need those deadlines as ‘leverage’ for delaying the health-care law’s individual mandate and adding a ‘conscience clause.’” His speech seemed to buoy conservative Republicans intent on defeating the health care bill, according to the Post.

Is saving the clause, for Ryan, really worth risking so much? As MSNBC points out, Ryan probably wants to stay aligned with the U.S. Conference of Catholic Bishops. At the Values Voter Summit over the weekend, where Ryan has annually appeared (although this year, he had to be video-conferenced in), the bishops reaffirmed their beliefs: “As Congress considers a Continuing Resolution and debt ceiling bill in the days to come, we reaffirm the vital importance of incorporating the policy of this bill into such ‘must-pass’ legislation.”

But Ryan may also be keeping a watchful eye on a 2016 presidential bid, which is why he hasn’t been widely proclaiming his support for the “conscience clause” and kept his statements very general at the Values Voters Summit. After all, Ryan saw firsthand how female voters turned on Mitt Romney after Romney threw himself behind the clause.