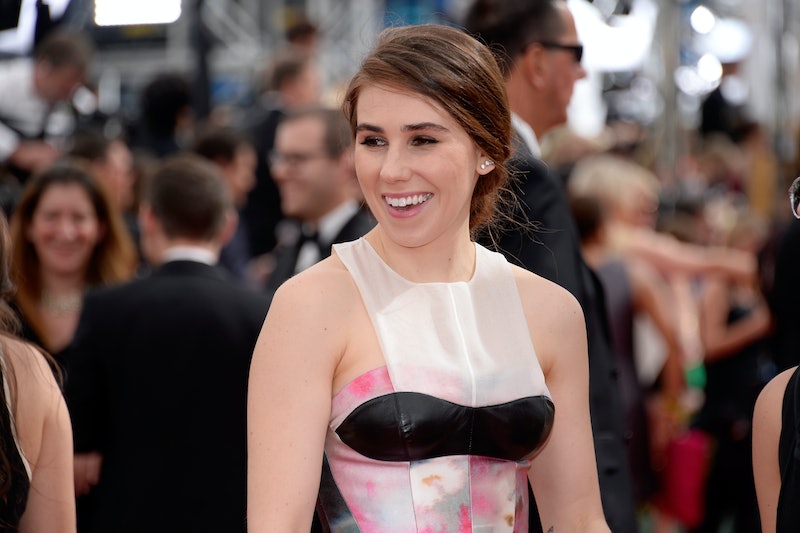 If there's one thing to say about the latest season of Girls, it's that Zosia Mamet is absolutely killing it as Shoshanna. After her character on the HBO series was reviled by critics during Season 3, she has finally bounced back to the Shosh that everyone loves. On the other hand, the 27-year-old actress has remained an extremely cool, charming, and likable gal, especially during candid interviews. Mamet's latest cover and interview with Stylist magazine is further proof that she really is the best Girls friend.

Looking super chic in a graphic print top, sunny, wide-legged trousers, and her awesome gray bob for the British mag's March 2015 cover, Mamet discusses her struggles with body image and how, over time, she has come to accept and appreciate herself.

“The perception of the female body has become incredibly convoluted," Mamet says. "I think for many women it’s an uphill battle that needs to be addressed. It’s definitely something I still struggle with but it’s about taking positive steps to feel good about yourself. Fashion, when you make it enjoyable, can definitely help you feel good in your body.”

Mamet also tells Stylist that her own fashion choices doesn't always match that of her pop culture-obsessed TV alter ego. "It’s a joke with our costume designer that I have never wanted to wear anything Shosh does,” she says. “Shoshanna's got a different jam than I do.” In her interview, Mamet calls feminist hero Katharine Hepburn her fashion icon and describes her own closet as "a little insane."

"A lot of people take fashion too seriously," Mamet says. "People are always going to have an opinion. We’re putting ourselves out there to allow those opinions. But that shouldn’t matter. When I pick an outfit I feel good in, if someone says I look like a homeless person, then that’s their opinion.”

Here's Zosia Mamet in the latest issue of Stylist magazine:

More like this
Hailey Bieber’s Moody Black Mani & Vampy Lips Are Peak Fall Vibes
By Audrey Noble
Zendaya’s Sheer Valentino Look Won Paris Fashion Week
By Dominique Norman
Bella Hadid's Best Runway Looks Of All Time From Paris, Milan, & More
By Allie Fasanella
Florence Pugh Wore A Sparkly Sheer Top at PFW & I’m Not Over It
By Allie Fasanella
Get Even More From Bustle — Sign Up For The Newsletter