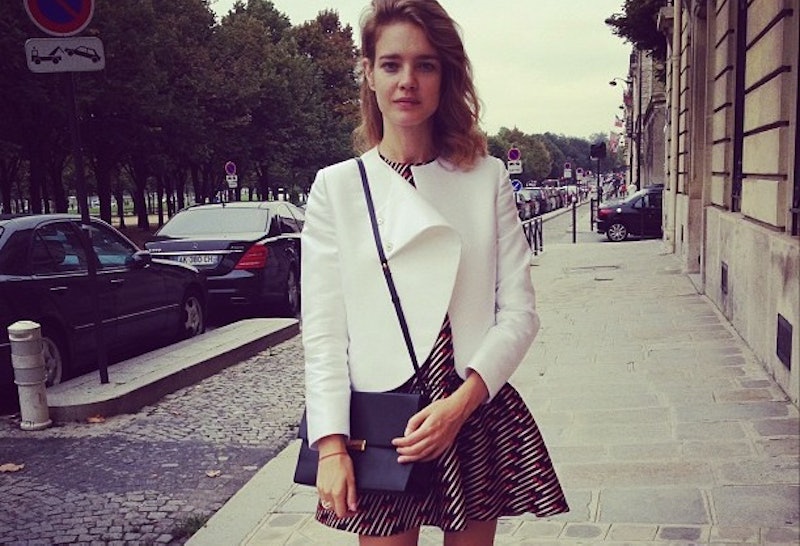 It's not #ThrowbackThursday, but it sure felt like it when I pulled my favorite magazine out of my mailbox today: Natalia Vodianova is Glamour's April cover star, and my first question was, "Who is this?" As it turns out, she's a model, and it begs the question: Are we going back to the glory days of non-celebrity models on magazine covers? If this is any indication, then quite possibly, and I'm not mad about it.

Although we've seen more models gracing the covers of magazines lately (see: the #Instagirls on Vogue's September issue cover last year), they're usually ones with a pretty huge level of celebrity already, like Cara Delevingne, Gigi Hadid, or Kendall Jenner. Granted, Vodianova isn't an unknown — she's modeled for the likes of Marc Jacobs, Stella McCartney, and Guerlain, and she's even earned the nickname "Supernova." But if I didn't know about her, she can't be that mainstream (fun fact: I possess a weird amount of knowledge on the topic, so much so that Sara jokes that I'm on the model beat.)

Vodianova isn't just a pretty face, though: beyond her modeling chops, what really landed her on the cover is what she does when she's not posing for the camera or walking in runway shows. In 2004, she started the Naked Heart Foundation, which helps children in Russia with special needs get the support, services, and acceptance they need. For her efforts, she was named a Glamour Woman of the Year in 2014.

I'll be interested to see if any other major magazines follow suit by choosing lesser-known models as cover stars, as opposed to the Sukis and the Georgia Mays of the industry. I'm always down for a '90s throwback, and seeing a model on a magazine cover is no exception, so fingers crossed.