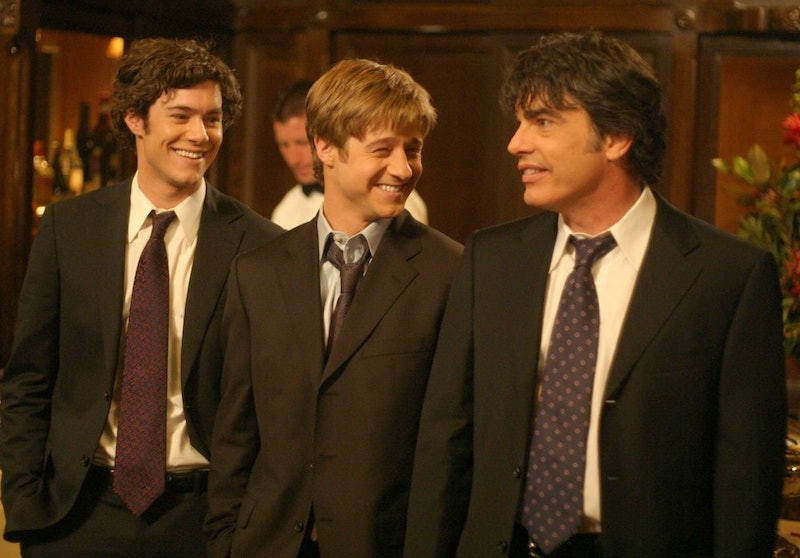 Most conversations about fashion focus on women: Who was best dressed? Who was worst dressed? Who looked good? Who looked better? Who stole whose look? And let's be honest, the spotlight that the fashion industry centers on women has its benefits and drawbacks. One thing I think we can all agree on, though, is that when it comes to clothes, us ladies typically eclipse the gents. If you're in doubt, think back to the last red carpet special you watched. When a man was being interviewed about who designed his suit — regardless of what an impeccable, flattering, amazing suit it was — did a small part of you wish you could fast forward to the next fabulous custom-made couture gown because who really cares who designed so-and-so's suit? Generally, that's the attitude we have toward men when it comes to fashion. As long as there are no obvious stains or holes, we don't acknowledge what men are wearing nearly as often as we probably should, and it's a shame because men have had some pretty major fashion moments throughout history.

It's easy to become immune to great guy style in a world that puts the emphasis on the pretty dresses and the magazines and the glamour, but think of what we're missing. Tailored suits go unacknowledged; plain white tee shirts are unappreciated. Women may always be synonymous with fashion, but let's not overlook the fact that men have had their share of memorable style moments, too. If you're wondering where you might see these iconic moments in men's fashion, you need not go any further than your Netflix queue. Many of our favorite TV shows from the past and present depict some of men's most memorable fashion moments, and here are 13 of them:

1. The Gladiator (As Seen On Spartacus)

So many trendy women's pieces have drawn inspiration from it, but the era of the gladiators was iconic for men, too. Unlike the fancy shirts and shoes that have come to embody men's fashion of today, in the Spartacus age, survival was the new black. It brings us back to a time where fashion didn't exist the way we know it now, and perhaps that's what makes what men wore then that much more impressive. Besides, if you ask me, armor will always be sexier than an ascot.

Deadwood proved that men's fashion in 1870s South Dakota consisted of a lot more than the stereotypical spurs and cowboy boots. The wardrobe for the fellas of Deadwood includes lots of simple, understated shirts and jackets that have an upholstery look to them and accurately depict the importance of function during a time when clothing often looked dirty and worn. It's different than what we're used to seeing today, but still surprisingly fashion forward in hindsight.

How to dress like a gentleman in the Post-Edwardian era? Don a bowler hat and wear tweed from head-to-toe. Don't forget to finish it off with a pair of Oxfords. The guys of Downton Abbey mirror the traditional yet sophisticated sensibilities of the era in slim-fitting wool suits and tailcoats. We need more tailcoats in the world.

The gents of Boardwalk Empire each had their own distinct sense of style reminiscent of the 1920s (and 1930s in later seasons). It was a time of tailored — yet not ostentatious — suits, collar bars, and wool. The men of Atlantic City, New York and Chicago each had their own sense of style influenced by their geographic location and wealth. The result is five season's worth of memorable ties and waistcoats.

5. The All-American Businessman (As Seen On Mad Men)

Arguably, the classic American men's suit has never looked better than it does on Don Draper in Mad Men. Mad Men takes us back to the evolving style of menswear in the 1950s and 1960s, but even though we see a lot of the cast in business attire — slim lapels and pocket squares — we get glimpses of their casual style as well, and they're equally iconic. Think of Draper's California wardrobe with all those polos and flannels.

Let's be honest here: Danny, Uncle Jesse and Joey took Dadswear to a whole other level in the late 80s and early 90s. Combine Danny's traditional, simple look, with Jesse's sometimes over-the-top ensembles and Joey's quirky style, and you pretty much have every dad's closet at the time. Full House made it clear that being a dad or helping raise a child doesn't mean you have to abandon fashion.

7. The Chic Geek (As Seen On Family Matters)

Of all the things Steve Urkel did, perhaps the best thing was represent the nerdy look so well on the small screen. Picking up on several stereotypically dorky styles with his glasses, suspenders, and pulled-high pants, Urkel proved once and for all that geeks can [and should] be confident in how they look.

8. The Original Preppy (As Seen On Saved By The Bell)

Oh, Zack Morris, you made preppy look so good. Zack Morris is the OP: Original Prep. In Saved By The Bell, he was preppy before being preppy had become a real thing yet with his high-waisted jeans, crew neck sweaters and tee shirt/button down combo that every guy will wear at some point in his life.

If The Fresh Prince of Bel-Air doesn't make you miss men's fashion of the 90s, nothing will. Will Smith's eclectic, vibrant style was as essential to the show as it was to fashion at the time. The unexpected mix of jeans with busy patterns or serious sweaters with high-top shoes perfectly illustrate how the 90s were a time of having fun and taking risks with fashion.

Back in high school, you could categorize most guys into two boxes: There were the Ryan Atwoods and there were the Seth Cohens. Ryan elevated the guy choker to icon status, and seeing Seth's laid-back, simple style every week made wearing t-shirts and simple polos approachable and cool, even for those who aren't anywhere near Orange County.

Of all the notoriously fashionable TV series we've seen through the years, Gossip Girl definitely belongs in the top ten. Serena and Blair may have stolen the style spotlight in many of the episodes, but the Upper East Side men were not to be outdone. There was the incomparable Chuck Bass with his snazzy suits, Nate Archibald, who always looked like a Ralph Lauren ad, and Dan Humphrey with his distinctive, Brooklyn vibe. Although all three guys represent three very different aesthetics, they each personify a specific, well-dressed New York dude.

12. The Casual Comfort Dude (As Seen On The Simpsons)

In The Simpsons, Homer Simpson epitomizes the comfy couture of the middle-class working man. For decades, his simple ensemble has seen him through his share of shenanigans and hijinks, just like any other man. The Simpsons made the fashion sense of the regular guy something to be celebrated.

13. The Modern, Fashion-Conscious Man (As Seen On Empire)

The men of the Lyon family in Empire each embody a unique perspective of how modern men dress. Jamal is the risk-taker, unafraid of unexpected silhouette and accessories, whereas Hakeem combines opulence with street style. Lucius's and Andre's aesthetic skews more towards formal business attire, but always commands attention and radiates power. No matter what they wear, the Empire guys each reflect what's current and now through their outfits.

More like this
The Biggest Fashion Moments Of Paris Couture Week 2023
By Dominique Norman
Phoebe Dynevor Serves ‘Bridgerton’ Underboob In Stunning Floral Gown
By El Hunt
15 Of Carrie Bradshaw’s Best Handbags From Sex & The City
By Dominique Norman
'Emily In Paris' Lucien Laviscount & Lucas Bravo Owned Paris Fashion Week
By El Hunt
Get Even More From Bustle — Sign Up For The Newsletter
From hair trends to relationship advice, our daily newsletter has everything you need to sound like a person who’s on TikTok, even if you aren’t.