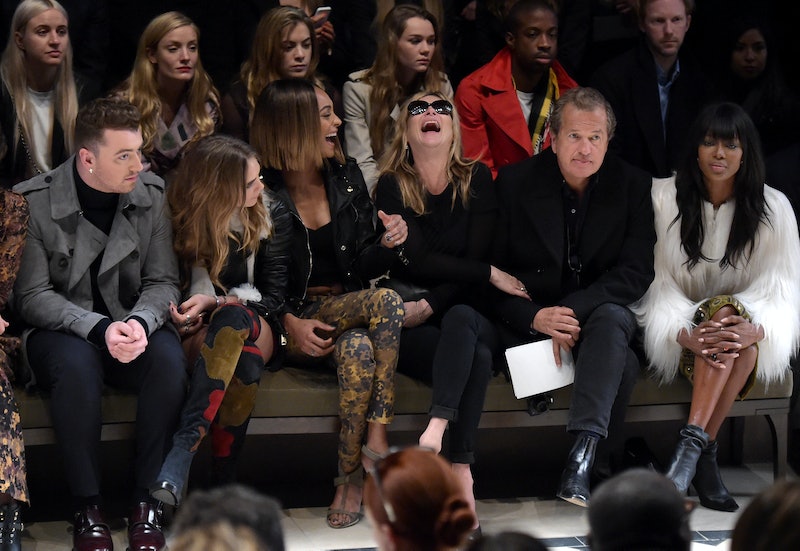 The bone of contention was reportedly their mutual pal Rihanna.

Already this report of this altercation is sounding a bit fishy, but here's the intel. The New York Post reports that Campbell, notorious for her phone-tossing temper, was screaming at her younger counterpart, accusing her of disrespecting RiRi. Pushing and shoving ensued. It's suggested that Campbell pushed first and Delevingne fought back. This is so very seventh grade, isn't it?

The melee reportedly broke out at posh party at Paris club Castel on Sunday, March 8.

A source claimed, "It was a noisy and packed party. Naomi was saying all these nonsensical things, she was ranting. There was a messy pushing match. Cara didn't understand because there’s no problem between her and Rihanna. Cara didn't want to be involved and was telling Naomi, 'Get away from me!'"

Another source said that Campbell was actually hanging out with Dakota Fanning, who was seated at a table with Delevingne, and that any pushing was due to the lack of space and the tight squeeze at the location.

IDK, this just doesn't sound very likely to me. Maybe there really was some tension due to space limitations or maybe Naomi Campbell did feel the need to defend Rihanna's honor over some miscommunication. But I am not buying it, since Rihanna is a big girl who can take care of herself and doesn't need her two beautiful, runway-strutting friends ripping hair out over her.

I am sure this rumored fracas isn't going to derail Delevingne's booming career and it sounds like a story capitalizing on Campbell's previous shade-throwing at the Instagram generation of models, to which Delevingne undeniably belongs.

While we're here, let's look at some images from Delevingne's new Topshop campaign to lighten the mood. Brows remain on fleek and the glamsual denim attire is on point.

Denim-on-denim works when it's different washes.

Those necklaces conceal the sideboob!

It's time to forget about the Cara x Naomi epic battle and head to Topshop to shop the Spring and Summer collection.