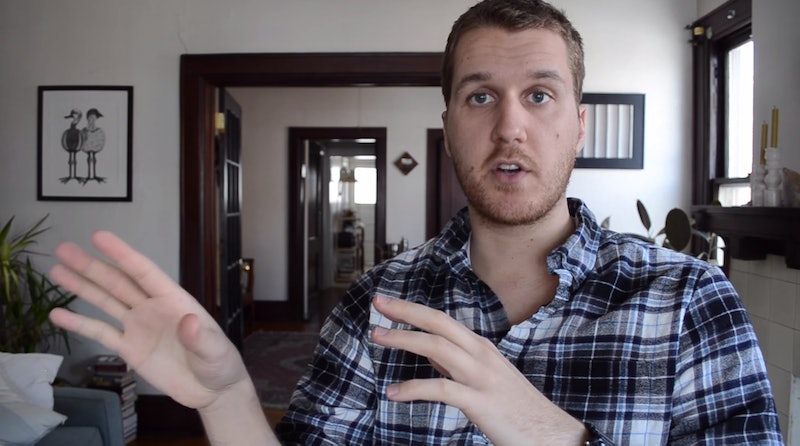 As a champion over-thinker, I understand more than anyone the impossible difficulty of deciding how to greet another human. When I run into old friends from high school I have this awkward high-five-hug maneuver that I should probably trademark, because I have a feeling it'll go far. But as impressive as my level of social awkwardness is, it is nothing compared to this guy who can't figure out how to say hello to women. He has singlehandedly tackled a complex and terrifying social order to greeting women that tested the firing power of my neurons more than anything I ever learned in school.

To be fair, this is the same broski who made an elaborate video on what not to get your girlfriend for Christmas, so his confusion about the female species appears to be chronic. But this struggle goes deeper than you could ever imagine. I just got a glimpse into the male psyche and it apparently involves not just indecision, but color-coded charts and dark thoughts about accidental erections while hugging. I guess I take for granted just how little I've ever had to worry about someone feeling my boner when I hug them. And I've also taken for granted that I've never had to navigate in a system of greeting so complex that this guy made this terrifyingly specific chart to map it out:

He has accounted not only for platonic friends, but co-workers, acquaintances, classmates, romantic interests, and partners. I didn't even realize just how many humans there were in my life until I saw this monstrosity—this man has opened Pandora's box of dysfunctional greetings and now I'm going to overthink everything forever. I mean seriously, listen to how insane this gets:

I have good news and bad news: The bad news is I can't really help this guy, because I am a chronic fist bumper and notoriously bad hugger who probably shouldn't be allowed to leave the house. The good news is I CAN suggest several musical numbers that he can use instead of normal hellos, just in case my dreams ever come true and we all eventually live in an endless musical.

Suggested use: New crush, or a Tinder date you really want to scare away by coming on too strong.

2. "I Just Came To Say Hello," by Dragonette

Suggested use: Casual get togethers, or when you accidentally visit a friend when they're in the middle of doing moving and you don't want to help.

Suggested use: When you don't know why someone is saying goodbye when you clearly just said hello.