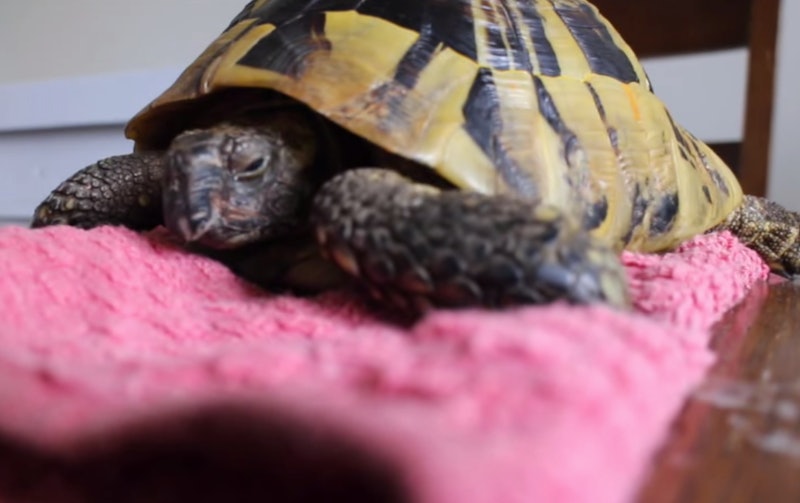 I'm not used to feeling jealous of tortoises, but this sure has been a banner week for it. First, of course, there was this interspecies game of tag between a tortoise and a dog that caused an unprecedented amount of FOMO. But now that I have seen this video of a man unboxing a tortoise who has been hibernating for four months, I don't even know what to believe about being a human anymore. Do you know what I would have done to have slept through the last four months of this ridiculous winter? A hell of a lot more than I would ever do for a Klondike bar, that much is for sure.

I've never owned a tortoise or given much thought to the care and keeping of one, but apparently hibernating is something tortoises do, and getting the conditions just right can be really tricky. Tortoises in the wild will actually hibernate up to seven months of the year (SO JEALOUS), whereas the ones in captivity, like this little guy Herman, will usually hibernate ten to twelve weeks. His owner went to extreme care setting up the perfect hibernation for this little dude, and watching the friendship between these two after they've been separated by sleep for the whole winter is adorable.

This right here has been Herman's home for the past four months. He's been sleeping in a shoe box that once belonged to a pair of "cool kicks," kept in the fridge at a cool 5 degrees Celsius.

Every week his owner took him out and weighed him to make sure he was doing okay in there.

There he is, just before getting what I imagine is the worst alarm clock wake-up call of a sleeping tortoise's life.

And here is a picture of me on Monday morning. How did that get in there?!

Seriously, look how one hundred percent done Herman the turtle is.

After waking him up, Herman's owner stuck him in a sink bath and gave him something called Reptoboost, which I imagine is what someone fed to the Teenage Mutant Ninja Turtles back when they were just teenage nothing-in-particulars.

Hopefully, for all of our sakes, Herman has slept through the worst of this winter. And because you clearly came here to watch an adorable animal waking up, I've thrown in a few more sleepy critters:

HAPPY DAY TO YOU, one and all.