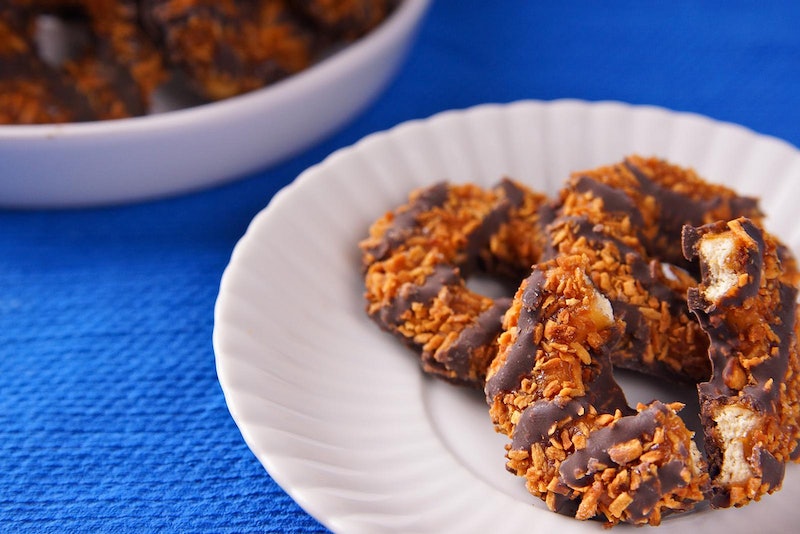 A troop of enterprising Girl Scouts in Salem, NH have truly embraced the spirit of entrepreneurialism that Girl Scout Cookie sales are meant to inspire by coming up with one of the greatest ideas in the history of the universe: A Girl Scout Cookie drive-through. I'm serious. If you live in or near Salem, you can get your Thin Mint fix without even leaving your car. Awesome? Awesome. Sign me up!

According to the Associated Press, Troop 12115 set up shop in a vacant warehouse on Main Street in Salem on Sunday. Given that the road is so heavily trafficked, it seems like like a no-brainer location at which to peddle your cookies — but the really clever bit is the whole drive-through thing. As of this weekend, the troop had sold over 1,200 boxes of Samoas (or Caramel deLites), Tagalongs (or Peanut Butter Patties), and more; their goal, however, is 5,000 boxes, which they hope the drive-through will help them reach.

I'm unclear about whether or not the girls will be there on successive Sundays, or whether it was a one-time deal this past Sunday; according to Cosmo, they'll set up camp “each Sunday,” but WMUR 9's phrasing — “Troop 12115 in Salem plans to host a special fundraiser Sunday” — sounds like it was a singular event. Either way, though, I'd bet money on other troops picking up the idea, too; this is actually the third Girl Scout Cookie drive-through we've seen this season. Troops in both Wisconsin and Colorado organized similar efforts back in February, and if you ask me, all of them should win some sort of bonus merit badge for their sheer ingenuity.

While we're on the subject, the following strange and unusual drive-through services actually exist or existed at some point in history. We certainly do like our speedy service, don't we?

California's Stanford Hospital and Clinics ran a drive-through emergency room service in 2009 as disaster preparedness experiment. The goal was to see how efficient they could get in the event of a pandemic. Guess what? It worked! Exam times shrank by more than an hour, enabling doctors to see more patients and cut down on cross-contamination in the process.

Alas, this one is no more; the Climax Gentleman's Club in Congruity, PA ceased operations after its owner's death in 2009. During its years entertaining roadside travelers, you could shell out $10 a minute per person to watch the show through a diamond-shaped window from the privacy of your own vehicle. Sketchy? Kind of — but also hilarious.

Back in 2006, the Contemporary Art Gallery in Vancouver made it possible to get cultured and stay in your car at the same time. The exhibition involved driving up to a kiosk and selecting one of six short films made by artist Brady Cranfield. According to gallery directory Christina Richie, the goal was to “blur the distinction between art and marketing.” As she put it: “I prefer to think of it as outreach.”

The Paradise Funeral Chapel in Saginaw, MI offers drive-through viewings for those in mourning. Lest it seem kind of gauche, though, it has its heart in the right place: The service is meant to accommodate people with physical limitations. Not many have taken advantage of the service yet, but the funeral home's president, Ivan Phillips, told the Associated Press back in October that he expected more people would use it once they figured out it was a) safe and b) not a gimmick.

Uh… I don't know about you guys, but this sounds like possibly the worst pair of items one could possibly retrieve via drive-through. As hard as it may be to believe, though, the Double Shot Liquor and Guns drive-through service did once exist in Schulenburg, TX. Perhaps unsurprisingly, it has since closed down.