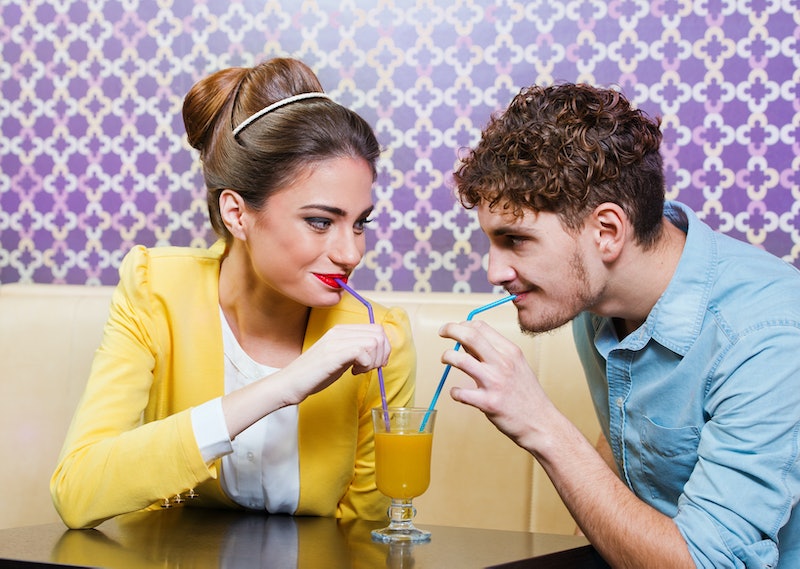 We all know how great it can feel to fall in love, but have you ever considered the potential health benefits? A new study found that the love hormone oxytocin could cause weight-loss in men. This preliminary research was conducted by Harvard Medical School and found specifically that oxytocin could suppress the appetite of men, which could easily be translated to a weight loss method.

In order to conduct their test, the researchers created a synthetic nasal oxytocin spray that did indeed lessen the amount of calories the men in the study consumed — especially the amount of fatty foods, which are often the very caloric. Lead researcher Dr. Elizabeth Lawson said "We are seeing early signs that oxytocin reduces how much food someone eats at a meal and improves the way their body handles blood sugar," about the effects of the study.

The study was conducted because research done on animals about the effects of oxytocin and appetite have suggested the hormone can reduce food consumption, but the research had yet to be translated to humans. In this study on men, they used 25 men, 12 of whom were classified as overweight or obese, who used either an oxytocin-based nose spray or a placebo. They were served breakfast immediately after using the spray and were given twice the amount of food that they ordered. The researchers then looked to see how much food the men ate. The experiment was then replicated, with the participants who used the oxytocin nasal spray being given the placebo version, and vice versa. The results? Those who used the oxytocin nasal spray ate 122 fewer calories and nine fewer grams of fat than those who used the placebo.

The nasal spray used is available for purchase in Europe, but hasn't yet been approved to sell in the states, since there are still more gaps to fill in the research. For instance, there is still more work to do before fully understanding how oxytocin affects appetite, and it didn't include any women. It was a small study and more research needs to be done, according to Paul Zak, Paul Zak, founding director of the Center for Neuroeconomics Studies at Claremont Graduate University in California. "From an evolutionary perspective, oxytocin is released during positive social interactions — when we are around others who care about us. This is just when food sharing is likely to occur. If we want to lose weight, having others around us who care about us can help reduce appetite," he commented.

Expect more research on the subject to be conducted, as Lawson says the team who authored this study will be doing further research on the hormone's effect on women and long-term obesity treatment. "We need to do more studies to see whether oxytocin could be used to treat obesity and diabetes," she said.

More like this
This Psychological Effect Might Be Keeping You From Hitting Your Goals
By Lexi Inks
The 19 Best Tweets & Memes About Bisexual Awareness Week
By Lexi Inks
The 5 Best SLS-Free Toothpastes, According To Dentists
By Amy Biggart and Danielle Calma
Angel Number 333 Is All About Self-Love & Alignment
By Brittany Beringer and Kristine Fellizar
Get Even More From Bustle — Sign Up For The Newsletter