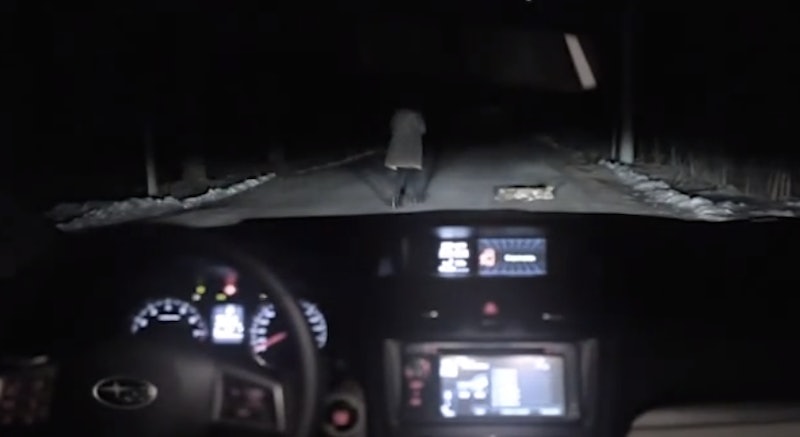 As the world's most paranoid driver, I am only a little bit embarrassed to admit that I basically drive with my foot hovering over the brake. But even the most cautious of drivers still mortally fear the idea of ever hitting an animal, which is exactly what happened in this bizarre Subaru ad where a woman hits a dog with her car. The ad is entirely in Russian, and the video is so grainy that it doesn't even look like an ad at first—I wish I could tell you that that was the weirdest part, but that would be a lie.

The woman reacts the way we all would, jumping out of the car in a total panic to check on this dog laying in the road. For a few seconds, you will sit in stunned silence. Did Subaru seriously just make us watch a dog die? Is this the Nationwide kid all over again?! But then the bizarre and beautiful plot twist comes along: The dog leaps up from playing dead, bolts over to the car, and steals it. He straight up drives away like a doggy boss. Only then do we even find out this is a Subaru ad in the first place. In Russia, you don't watch ads—ADS WATCH YOU!

Honestly, I haven't been on an emotional roller coaster over a dog in an ad this intense since the Bud Light commercial at the Super Bowl. You really just have to experience this weirdness for yourself.

I would like to take this opportunity to shed light on a conspiracy theory that I firmly believe in: Dogs are possibly from another planet. A few months ago we were all boggled by the video of a dog that streaked across the highway out of thin air, which was obviously extraterrestrial activity. Subaru clearly wasn't airing this ad to show off their anti-collision automatic braking feature; this was a public confession that they know the truth, and it is our job do to with this information whatever we can.

Don't trust Fido, guys. He may look furry and adorable but the truth is he has a lust for fast-moving cars and an alien mothership that is probably hovering behind one of Jupiter's moons as we speak.