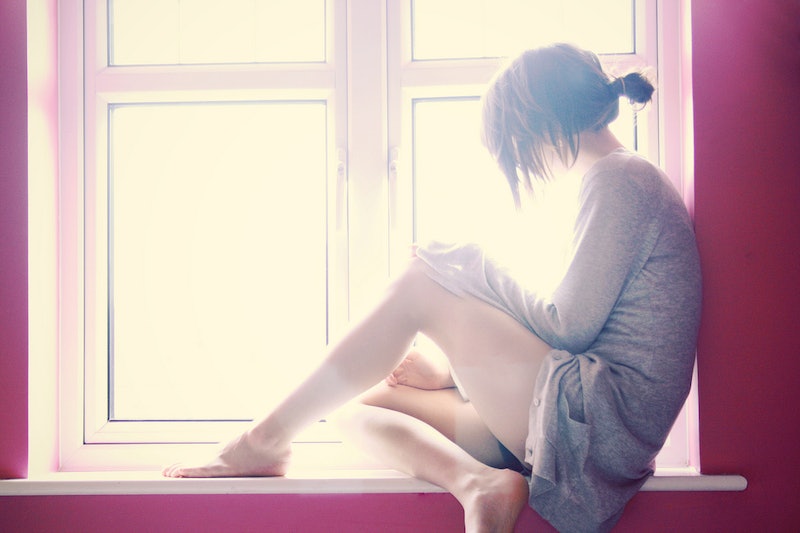 Believe it or not, there exists something more difficult, seemingly impossible than scrubbing your shower grout until it glistens white. There is, despite what you might think, something harder than convincing your cat to remain stationary for long enough for you to trim his claws; harder even than shelling each chickpea before plopping them in the food processor so you can DIY hummus instead of caving for another Sabra BOGO sale. What is this monumentally challenging, nearly undoable task? Calming down and doing absolutely nothing. Sure, "doing nothing" has become synonymous with doing a lot of activities like scrolling Instagram hashtags for pugs, investigating hangnails, refreshing Gmail, eating olives while standing, etc. But! This website totally calls out the difference between those activities of not-quite-nothingness, and an actual cessation of everything.

This website challenges you to "relax and listen to the waves" and do positively nothing else for TWO WHOLE MINUTES. Two minutes doesn't sound long, but it's pretty much forever when your brain starts begging you to scope out your right thumb's cuticle. It keeps a running countdown from two minutes flickering over a serene sunset. As soon as you so much as breath heavily on your touchpad, the numbers turn red and the clock stops, essentially signifying your failure at yet one more aspect of life. No judgment if you find this a truly trying endeavor. It took me about seven attempts to make it the full two minutes without caressing my keyboard, but I did it. By the way, when you mess up, this greets you with pure shame:

Here is an exhaustive list of every thing I wanted to do while strictly instructed to do not one thing for two minutes:

Recently my partner was diagnosed with high cholesterol, so in an act of camaraderie, I promised I would also adopt a habit of eating some kind of heart-healthy cereal every morning because I'm the greatest. But it hasn't done much for me.—my clothes fit exactly the same and I desperately want lunch before 11:30AM. While watching this video, I daydreamed so hard about the lackluster spaghetti and spinach in my fridge that I actually gripped the sides of my chair as an anchor.

I have his greatest hits streaming during the experiment and curiosity creeps in like a cat scandalized by the fact you're not up and feeding him at 5AM. Is he still alive? What is he doing now? I bet he has a ranch somewhere. Mmm, ranch....ranch dressing...I am so hungry.

My cat Kevin is usually glued to my lap at all times but right now he is selfishly set up on the foot of my bed, a full yard from the desk where I sit. But, it's getting warmer with winter waning so his long, black hair comes off in ethereal clouds that then take flight across my apartment and sometimes up my nose. It's probably OK that I can't pet him right now, but I can't stop thinking about it for some reason. BRAINS AREN'T MEANT TO BE LEFT UNATTENDED LIKE THIS.

I found Black Swan nightmarish as a whole but that one scene with the gory ribbons of finger skin was so upsetting. (Here it is as a GIF! For you! You're welcome!) I try to focus on that so I don't succumb to investigate myself.

How much I need a manicure

HAVE TO FIX THESE FINGER FRINGE THINGS.

I had a funny joke in my head two minutes ago about Browne, but now it is gone forever. Sad to think it died before it could have even maxed out at two pity-favorites.

Checking in on invoices

An enriching facet of being a freelancer is occasionally chasing checks. I consider how I would like to eat something other than sad spaghetti—maybe morose couscous—which reminds me to follow-up on invoices filed with various clients. Two minutes to wait before doing this is a freaking eternity.

Yes, maybe I am a 27-year-young teenager because I still love the crap out of Tumblr and am physically fiending to see if any accounts I care about have posted recently.

Seriously, pizza ordering is one of the best functions of the web, and also it would mean no spaghetti for lunch.

Gchatting my significant other about lunch

I immediately feel guilty about seriously entertaining the idea of getting a pizza delivered when a doctor just told my person he should probably never eat one of those again. I wonder what he has planned for lunch.

Gchatting everyone else about lunch

Nah, scratch that. Chatting with my SO about his lack of pizza is too depressing. I know one writer friend is tasked to cover an especially dope restaurant today for an assignment. I think it's Korean tacos. I want a Korean taco or, at least, I want to know everything about the ones she tried.

Texting my friend about Korean tacos

Surely the answer is there.

Are there dances that go with "Somebody's Baby"? If not made official by Browne himself, perhaps an inventive fan? Are they hard to learn and mimic? I could practice.

I have Gmail, Google Drive, an Google Doc where I'm writing this post, this horrible website, three Airbnb profiles, visiting information for a local miniature animal petting zoo, a YouTube following two miniature donkeys, a recipe for cholesterol-lowering bread, and the Thesaurus.com search results for the word "challenge" all open. Is this a problem? Is this why my computer keeps crashing?

I seriously need some 2Chainz or something to distract from these spaghetti urges. He is starting to sound the way I imagine old penny loafers taste.

TurboTax keeps emailing me and I don't want to be rude/arrested. This is getting dark.

And when I finish, I brace myself for something huge and congratulatory. As the numbers get to 0:05, I actually bat my own hands away from preparing to screen grab the anticipated dolphin + fireworks reward show. There are no dolphins or fireworks, just:

Thanks? I guess I appreciate the potential zen achieved by such a regular practice, but it's not enough to replace even the saddest spaghetti.