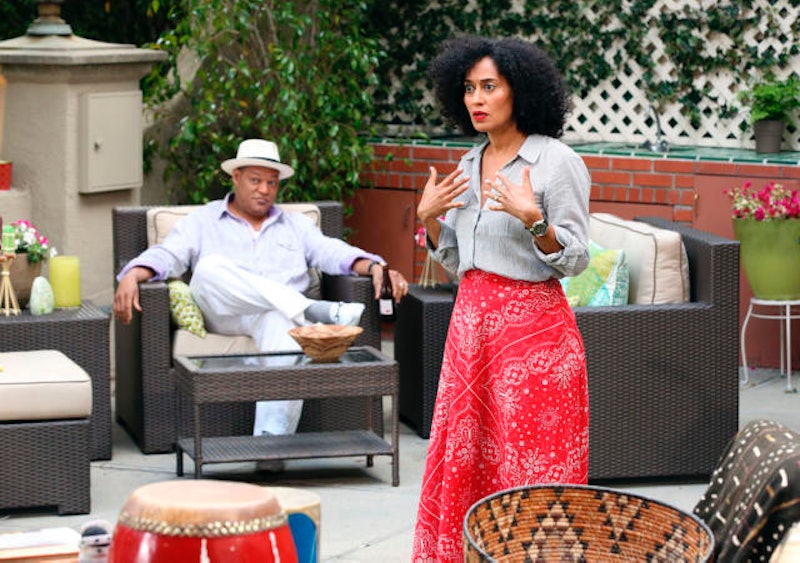 Television has had its fair share of fashion icons and it only makes sense: As opposed to celebrities who generally only pop up on our radars when there's a red carpet or a fashion week, TV characters are invited into our homes every week. Their style is also very thoughtfully crafted to create a narrative and give us insight into their personalities — we're paying attention to their clothes, if only subconsciously, and they're just as much a part of the story and plot as anything else. I mean, I know the creators of Sex and the City said that New York was the fifth character on the show, but I think that the real fifth character was the ensembles.

The TV characters that we've assigned the title of "style icon" to are generally wearing outfits that the majority of viewers aren't pulling off on the regular. Said outfits are often a bit more high fashion, more expensive, and more amped-up versions of what's realistic for most of us to wear day-to-day. I mean, that's what style inspiration is for, right? Not necessarily a blueprint, but a suggestion — something to give us ideas and for us to remix and play with. However, there's something refreshing about the current crop of on-screen icons whose style actually feels accessible and realistic.

From New Girl's Jess to everyone's imaginary best friends Ilana and Abbi on Broad City , female TV characters are becoming more relatable than ever (if not still so very white, straight and cis). They're messy and imperfect and wearing the same clothes sometimes, because recycling fast-fashion pieces is what you do when you're in your twenties. They always look cool, but not too hip or flawlessly put together. Broad City's fashion keeps it real and is definitely very accessible. So accessible, in fact, that you'd probably be able to dress just like Abbi with items from your own closet right now, if you wanted to. While part of the joy of TV is that it can be an escape from our everyday lives and gives us a chance to live in a fantasy world where someone who writes one newspaper column a week can afford a closet of designer threads (I'm looking at you, Carrie Bradshaw), there's something refreshing about being able to see elements of yourself onscreen to laugh and commiserate.

Now's a better time for accessible fashion on TV than maybe ever before. However, there's no one on TV who is dressing like the gorgeous, hilarious Tracee Ellis Ross's Rainbow on the sitcom Black-ish. The way that costume designer Stacy Beverly dresses 'Bo strikes me nearly every episode. I'm pretty sure my boyfriend is really sick of me saying, "In, like seven years, I want to dress just like her," as I madly start to Google who she's wearing while the show is still on.

Rainbow is the perfect mix of, "Yeah, I could wear that," accessibility and, "Is that Isabel Marant?" aspiration. 'Bo has a clearly defined sense of style — a modern, subtle bohemian chic that plays up her new-age upbringing and her current success. We see Rainbow in her scrubs and pajamas almost as much as we see her in occasion dresses and causal separates. She's a mom who doesn't dress in the great tradition of TV moms: frumpy pullovers, ill-fitting jeans, and chunky sneakers. You know her sweaters are Eileen Fisher, her sneakers game is on lock, and her denim is designer. She does a closet full of designer, in fact, but that's because she works hard and earns it (again, looking at you Carrie Bradshaw). 'Bo dresses for comfort above all, but always looks fashionable while doing so — unafraid of playing with fashion and trends in a way that feels true to her signature style. I mean, the woman has worn at least two rompers/jumpsuits on the show already.

Despite the series' dabbling in the surreal at times, Rainbow as a character is so grounded in reality and her wardrobe reflects as much. She's a reminder that we won't grow up to be boring, but that our style will become more refined and more us with time. She's the type of character that the Abbi's and Jess's of the world, like me, can hope to grow into.