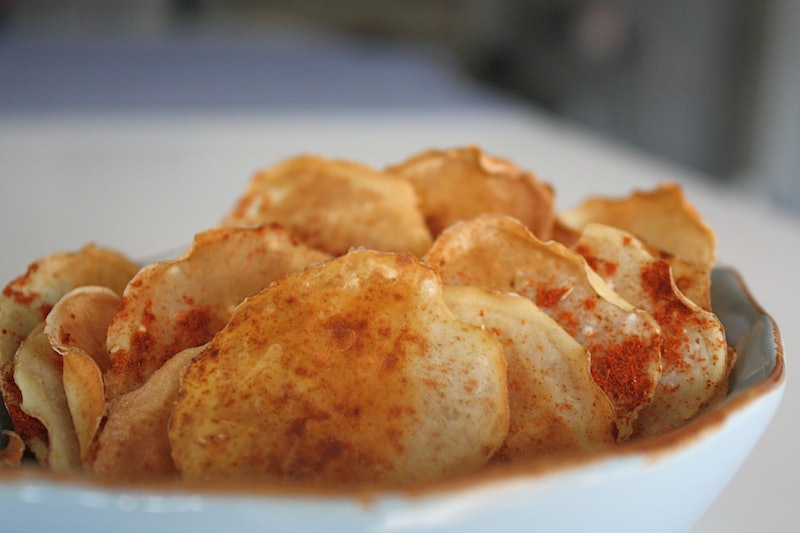 There's nothing in the universe quite as satisfying as the first crunch of a potato chip between your chompers. The salty base tickles the tastebuds, and the added artificial flavor seals in the explosion of nom. And since it's National Potato Chip Day on March 14, there's really no better way to celebrate than by opening a big bag and eating as many chips as your belly can hold. Chips are much like pizza in that even bad pizzas are still good pizzas, because they're pizza, and sauce + bread + all the cheese will never let you down. Chips are delicious on their own as a snack, as a side with a burger and a beer, or between the bread and lettuce of a sandwich.

The history of chip flavors is just as bold as the flavor combos themselves, which have often left us salivating and scratching our heads at the same time. They've been weird, wild, and just spectacular. And the crazy flavors have not just been designated to the good ol' U.S. of A. Nope, we're not the only country who likes to dabble in snacks that taste like entrées. There are bonkers chip flavors all over the world, and together, all of these flavors have made the world a happier place. Here are our favorite chips that taste like breakfast, lunch, dinner, and dessert.

It's the only food that tastes anywhere near as good as actual bacon mac and cheese.

Whether it's chocolate-covered chips or chocolate bars with chips inside, this balance of sweet and salty is sheer perfection.

Something tells me Ron Swanson would either hate these more than yoga, or they'd make him do this:

I'm not telling you that it's a good idea to eat these for breakfast, but you totally could.

My favorite snack is pickles and chips, so thank you for giving me the most efficient way to consume too much salt at 3 p.m.

Let's be real: You only eat the real version for the croutons, so this is the next best thing.

I'm not even sure how this is possible, but it's a lot easier than cooking a real stew for eight hours.

There's no easier way to transition a real food into a chip than by starting with a baked potato and ending in a fried potato. I'm sold.

Why bother making a sandwich that you'd just put chips into when you can have a sandwich-flavored chip?

For those days when you feel compelled to eat healthy.