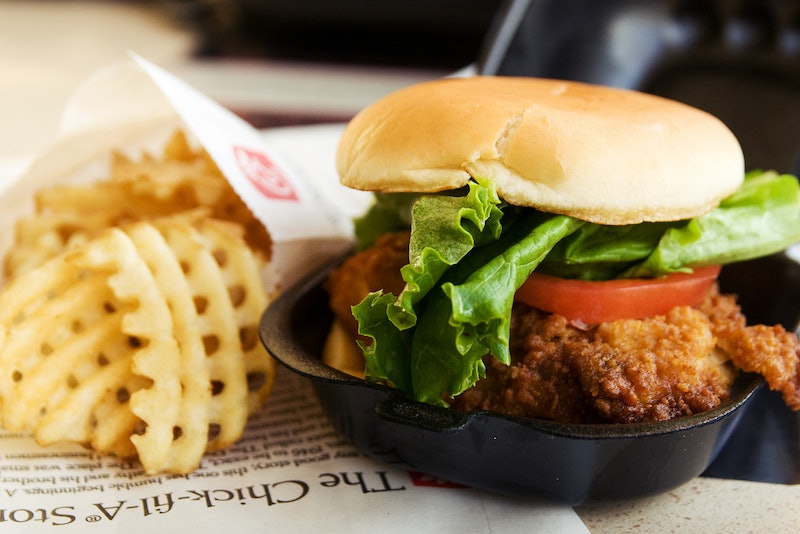 Big news for Southern transplants to the Big Apple: Chick-fil-A is coming to New York City. But you guys? This is not your average Chick-fil-A. In fact, I'm willing to bet that it will be the most impressive Chick-fil-A you have ever seen. The Chick-fil-A of your dreams, even. Is your body ready? I hope so.

As Thrillist noted, the chicken chain's plans to open a number of restaurants in New York last year didn't end up coming to fruition. Now, though? There's a plan. It's a big one. And it's definitely happening. According to Crain's, Chick-fil-A will open a humongous location in the city sometime in late summer. Said Carrie Kurlander, the brand's vice president of public relations, “We are beyond excited about opening our first freestanding restaurant in New York. This location will allow us to serve fans who have been asking us to come to New York and to earn the opportunity to serve new customers.” If all goes well, more NYC locations will follow.

Of course, one of the big questions about Chick-fil-A's forray into the New York market is how the city's LGBT community will take to the news. As I noted the last time I wrote about Chick-Fil-A, I find it difficult to talk about the chain without acknowledging the 2012 same-sex marriage controversy; for their part, though, the company has since vowed to keep their personal feelings out of business matters and ceased funding more of the organizations opposed to LGBT rights to which they had previously donated. Meanwhile, LGBT advocacy group the Empire State Pride Agenda seems to be adopting a “forgive and move on” stance; said executive director Nathan Schaefer to Crain's:

“We hope that Chick-fil-A's planned entrance to New York City comes with a side of LGBT-inclusivity and a newly-thought strategy for supporting ventures that are equality friendly. The bedrock of our city is built on diversity and the history of the LGBT civil rights movement took place on our streets; we encourage all new businesses, including Chick-fil-A, to learn from the mistakes they've made and welcome a new era that is reflective of the people they will be serving.”

Remember how I said that this particular Chick-fil-A location would be absolutely wild, though? Here's a little Chick-fil-A by numbers list for you, based on all of the little tidbits Crain's dropped for us in their oh-so-knowledgeable article. Head on over there to see a mock-up of what the location will look like — it's pretty astonishing.

48: The number of years Chick-Fil-A has existed.

1,850: The number of other Chick-Fil-A locations currently peddling their wares.

15: The distance in miles between New York and the nearest proper Chick-Fil-A.

It's in Paramus, NJ.

Zero: The distance in miles between New York and the nearest sort-of Chick-Fil-A.

Apparently there has been a “tiny outpost within the food hall of New York University's campus” for some years.

Three: The number of floors the restaurant will have.

Three floors of fried chicken. What is this insanity?!

5,000: The square footage covered by those three floors.

450: The rent per square foot of the space in dollars of the ground floor.

Note, though, that I calculated this one myself from what we know about the square footage and rent per square foot of the ground floor; as such, it is an estimation only. It should not, under any circumstances, be quoted as fact.

10: The number of registers the restaurant will have.

No other Chick-Fil-A in existence has that many registers.

80: The number of seats the restaurant is expected to have.

Zero: The number of Sundays the restaurant will be open.

Chick-fil-A is always closed on Sunday, because, according to its owners, “all operators and team members deserve a day off.” Whether or not you go to church on that day off is up to you.