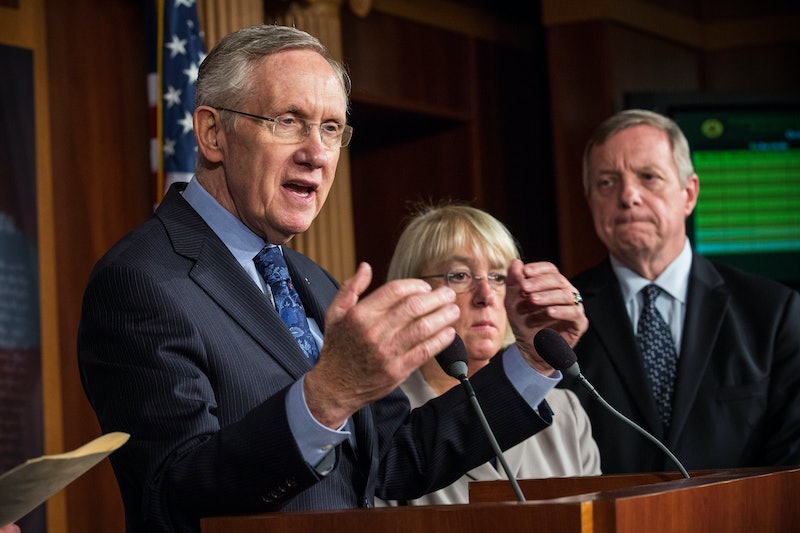 There might be a deal to avoid hitting the debt ceiling after all. "I’m confident we’ll be able to reach a comprehensive agreement this week in time to avert a catastrophic default," Senate Majority Leader Harry Reid told the Senate Tuesday. As of Tuesday morning, two different funding bills were being discussed, one from the Senate and one from the House, but the House plan fell through around midday Tuesday.

An outline of a deal emerged from the Senate late Monday, and is expected to be approved by the upper chamber and sent to the House as soon as Tuesday. According to sources, the Senate's plan involves reopening the federal government into January, and raising the debt ceiling until mid-February 2014. Longer negotiations over the budget, meanwhile, would try to reach a permanent solution by Dec. 13.

The Senate outline, as it surfaced Monday, did not involve any major concessions to Republican lawmakers, some of whom demanded a one-year delay in Obamacare's unpopular individual mandate like that given to business owners. But President Barack Obama has long likened the government shutdown and debt ceiling crisis to a hostage situation, and insisted that he will not let Republicans get their way. Instead, the GOP gets only minor wins in this proposal: income verification requirements for those getting subsidies to buy healthcare, and a delay of a tax unpopular with unions.

The talks, led by Senate Majority Leader Harry Reid and his Republican counterpart, Mitch McConnell, have a high probability of clearing their party caucuses. On Monday, Reid said they had made "tremendous progress." "Perhaps tomorrow will be a bright day. We're not there yet. We hope it will be," he said. McConnell was also optimistic, noting that "It's safe to say we made substantial progress, and we look forward to making more progress in the near future."

As we reported yesterday, Reid and McConnell might not actually like one another — something that was expected to hamper their ability to negotiate honestly and hammer out a deal. But it seems that despite interpersonal differences, the members of the Senate are still better able to come to an agreement than those in the House.

In the House, meanwhile, it remains uncertain whether Speaker John Boehner will be able to cajole his Tea Party comrades into supporting the Senate's bipartisan funding bill, or even if he wants to. If he is unable to do so, the country will once again be on the brink of defaulting on its debt. The debt ceiling is expected to be reached on Thursday, and a failure to raise it could have catastrophic effects on world markets. (At Slate, Matt Yglesias makes a case for abolishing it entirely.)

In an email to Politico, one senior GOP lawmaker from the House wrote, “I HIGHLY doubt we just accept it without amendment. The insurance tax isn’t in our top 10 list of Obamacare wants/needs/desires.” Republicans, the Politico article reports, "concede that they can’t go far past the Oct. 17 deadline, but they think they can tip-toe close — and perhaps dance an inch or two over." Yikes.

The failed House bill, led by Speaker John Boehner, would have reopened the government until Jan. 15 and raised the debt ceiling until Feb. 7. "The legislation would also delay Obamacare’s tax on medical devices for two years; cancel health-insurance subsidies for members of Congress, the president, vice president and the cabinet; and beef-up income verification requirements for Affordable Care Act subsidies," Politico reports. Some of the preconditions in the House bill had already previously been declared unacceptable by the presidential administration and Senate Democrats.