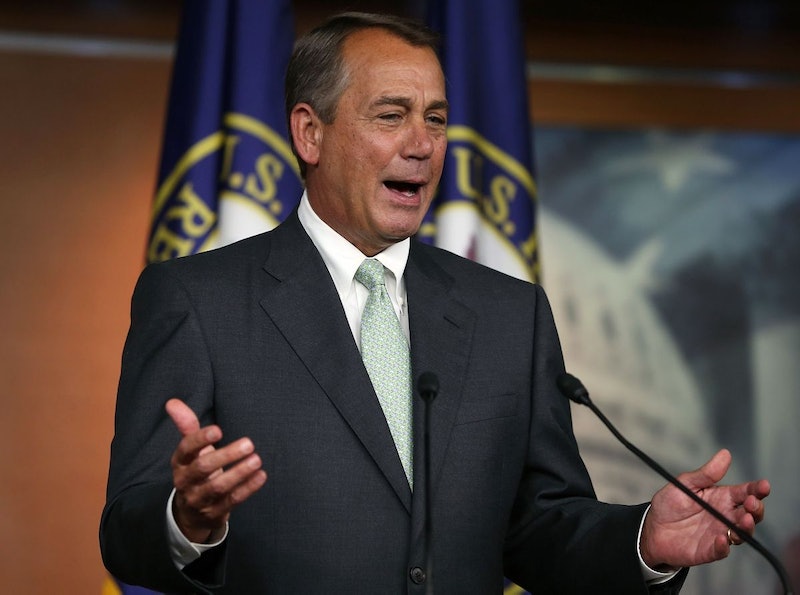 Republicans and Democrats are reportedly closer to a deal that would raise the debt ceiling. We’ll believe it when we see it. As of Tuesday morning, two different funding bills were being discussed, one from the Senate and one from the House, but the House plan fell through around midday. Still, the prospect of a solution to this whole insane, manufactured fiasco is very encouraging, because the results of a debt ceiling breach would be awful. The reasons why are numerous; we’ve limited it to three. First, though, a bit of background on what exactly the debt ceiling is, and what it means to breach it.

When the United States authorizes more in spending than it receives in tax revenue — which is usually the case — it has to borrow money to make up the difference. In most democracies, the authorization to borrow that additional money is granted automatically whenever legislation that contains new spending is passed. But the United States is different.

In 1917, Congress set a limit as to how much the U.S. government could legally borrow; that’s the debt ceiling. As the country racks up more and more debt — that is, as Congress authorizes more and more spending — that limit has to be periodically raised, or else we can’t pay for all of the things the government has committed to pay for.

The debt limit only applies to spending already authorized by Congress — for example, Social Security. It doesn’t affect the ability of the government to authorize additional spending. The debt ceiling also authorizes the U.S. Treasury to pay bills that Congress, by way of passing legislation, has already incurred.

If it seems silly to you that Congress votes on a bill that contains spending and then, later, has to vote again to authorize that spending, you’re right. It is considered silly, which is one reason why no other constitutional democracy on the planet — except for Denmark — has a system like this.

The debt ceiling currently stands at $16.699 trillion. If Congress doesn’t lift it before this Thursday, the U.S. treasury won’t be able to borrow any more money to make payments that Congress has already authorized. This could — or will, as increasingly seems the case — have far-reaching consequences. Here's what would happen:

The most direct consequence of a debt ceiling breach would be that a ton of people wouldn’t get money they’ve been expecting and relying on. The myriad of payments that the Treasury authorizes every day — Social Security payments, Medicare reimbursements for doctors, bills from defense contractors — would eventually just stop being processed.

This has never happened before, and so it’s unclear how the Treasury’s computer system would handle this. Eventually, though, people would stop getting paid. These people include active-duty military personnel, Social Security recipients, veterans, doctors who treat Medicare patients, millions of employees at government agencies, employees at private companies that the government contracts and even bondholders.

This might not happen immediately. Come October 17th, the Treasury will have approximately $30 billion on hand to pay outstanding debts. That might sound like a lot, except for the fact that the Treasury often spends as much as $60 billion in a single day on outstanding bills. After this $30 billion is exhausted, it will have to rely on incoming tax revenue, but that’s only expected to cover 68 percent of outstanding payments for the next month.

Here, for some perspective, is a list of upcoming bills the Treasury faces after October 17th, courtesy of the Bipartisan Policy Center.

2. Things Will Get More Expensive, And What You Already Have Will Be Worth Less

The failure to pay off bondholders is what’s most worrisome to many economists, as that would have ripple effects throughout the world economy, which is premised on the notion that Treasury bonds are the safest place to stick one’s money.

If bondholders aren’t getting paid anymore, the expected result would be a sell-off of bonds, as they’d suddenly be perceived as a less secure investment. This would in turn cause interest rates to rise, which would have wide-reaching and unpredictable consequences. Mortgage payments would increase, credit card interest rates would go up, and college loans would be harder to take out.

No one is certain how the markets would react to a default, as it’s never happened before. It’s not unlikely that stock prices will plummet — the “why” here is complicated, but has to do with in part the fact that the model used to price stocks is closely related to the perceived security of Treasury bonds. More generally speaking, the mere fear of economic calamity could itself result in a sell-off of stocks.

In any event, if stock prices fall, the value of 401(k)s and other retirement plans that include stocks will plummet. So will mutual funds. The Treasury itself believes that the value of the dollar itself could fall, which is another way of saying that inflation would go up and make everything more expensive for Americans.

3. The Economy In General Will Gets A Whole Lot Worse

This is all bad stuff, but the kicker here is that all of these various terrible economic consequences are interrelated. They bounce off of each other, collide with one another, amplify one another and generally make a bad situation much worse.

Here’s one example: If there’s a sell-off of bonds, interest rates will go up. When interest rates rise, loans in general become more expensive, which hinders the capacity of businesses to invest and grow. Because running a business at pre-default levels will become more expensive, companies will likely cut back on hiring new workers, or possibly even fire current employees. So unemployment will probably go up.

If fewer people have jobs, they’ll have less money to spend on consumer goods. So will recipients of Social Security and veterans’ benefits, or employees at various government agencies, who won’t be getting their checks anymore. And if, as some speculate, the dollar itself becomes less valuable, people will have to pinch pennies even more. With Americans in general spending less money, businesses in turn will suffer, meaning they’ll have to lay off workers, and, well, you see where this is headed.

Is There Any Good News?

The good news, if such a thing exists in this situation, is that despite people like those pictured above, Democrats and Republicans in the Senate are apparently close to an agreement that would raise the debt ceiling until February 15th (and, as a bonus, fund the government until a month earlier). The bill would contain some minor, generally inconsequential token concessions from each side, and would probably pass the Senate without difficulty.

There’s no certainty it’ll pass the House, of course, but Speaker of the House John Boehner has privately told his colleagues that he won’t let the country default. At this point, that basically means he’ll take whatever bill the Senate passes and put it up for a vote, and if he does, it will almost certainly pass with almost every Democratic vote and a handful of Republicans.

So there could be a way out of this yet. But if Congress doesn’t find it, the country could be in for a whole lot of trouble.