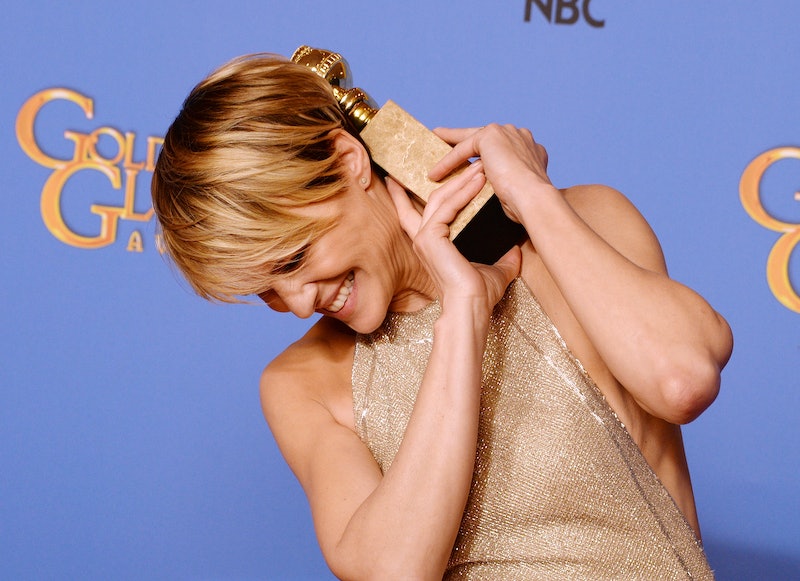 Robin Wright — a.k.a. Claire Underwood, better half of the fictional President of the United States on House of Cards (but you knew that already) — has been a known deity since she first stole our hearts as Princess Buttercup in 1987. The stunningly glam actress has been a staple on our movie and televisions screens for decades, and now she's hitting newsstands. Robin Wright graces the April cover of Vanity Fair looking predictably glam.

Inside the issue, Wright opens up about everything from her signature First Lady coif to her amazing sex with Ben Foster, to whom she’s currently engaged. “I’ve never been happier in my life than I am today,” she tells the glossy.

And you can certainly tell by looking at her. In a behind-the-scenes video of her shoot on Vanity Fair's YouTube channel, Wright wows in neutral gowns (a whole rack of them — enough to clothe an entire red carpet's worth of celebs). Her cover look features a chic, pearl silk floor length dress that has her looking like an angelic vision. The ever-present white-blonde pixie cut doesn't hurt, either. Wright appears at ease in the image, comfortable as she navigates the shoot in her bare feet, and, yes, genuinely happy.

Happy in the world of Wright, it seems, goes hand-in-hand with really (really, really) good sex. “Perhaps it’s not ladylike [to say], but I’ve never laughed more, read more, or come more than with Ben,” she says “He inspires me to be the best of myself. There’s so much to learn.” And then she adds some Ghandi-level introspection on the intersection between love and inward growth: “It took me a long time to grow up. Love is possible as life is possible.”

Love is possible, says the muse, as life is possible. And anything is possible after you leave your destructive marriage to Frank Underwood!

But Wright isn’t spilling any beans about her IRL failed marriage to Sean Penn, with whom she has two children, a burning question for many of Wright's loyal following. Maintaining her class with a level of candor, she tells Vanity Fair’s Sam Kashner in an email, “I believe we were together not only to have our beautiful children but to learn how to love … for the next time around, the right way. And then, what I’m looking for in people now is kindness.”

Kindness is the currency needed to win the affections of Robin Wright. Duly noted. The whole interview will be available when Vanity Fair hits newsstands in April. Until then, here’s a definitive ranking of feminist HoC moments to sate your Claire Underwood fix.