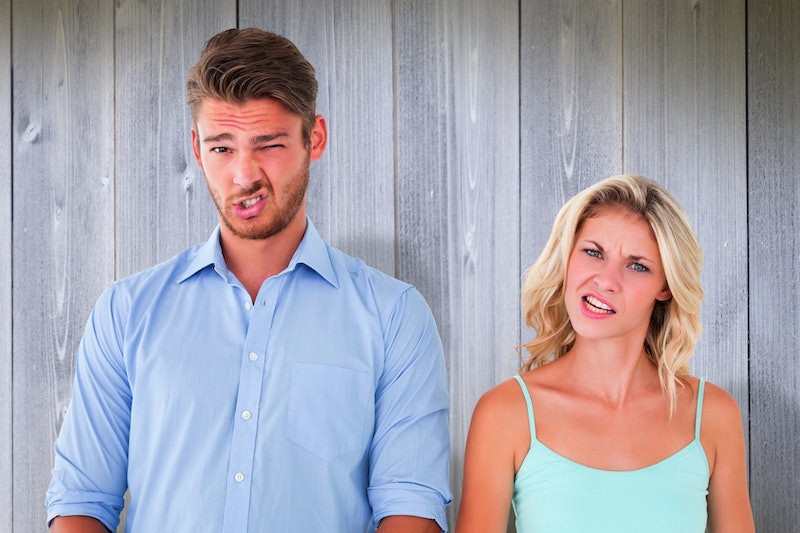 Lots of weird products exist for couples, so it was only a matter of time before someone sat a whole bunch of people down and recorded their reviews on film, right? The results are sure to be hilarious — and luckily, BuzzFeed has us covered with one of their latest videos, “Couples Review Couples' Products.” By “couples' products,” by the way, I don't mean sex toys (although I would imagine that would also be a video worth watching) — I mean odd and unusual products that are ostensibly supposed to appeal to common problems couples have: Arms falling asleep while cuddling, for example, or the awful feeling you get when you're away from your SO for too long.

BuzzFeed's subjects for this incredibly scientific experiment were four couples who had been together for anywhere between one and four years. The couples spanned a variety of orientations and arrangements, and they were all game to test these products out — even if they were largely confused by the offerings. How did it go down? In a word: Magnificently. Here are a few of my favorite reactions; scroll down to watch the whole video. You won't regret it. I promise.

I'll be honest: Upon first viewing it, I had no idea what this thing is for. Neither did the couples in question, though, so at least I'm not a lone, right? I mean, are you suppose to bond by sticking your faces into it?

Are you supposed to snuggle with it?

Aha! It is for snuggling! Good to know!

For the uninitiated, Smittens are “walking mittens for friends and lovers.” Some thought the idea was "cute"...

...While others gave it the caveat, “As long as you never go out in public”:

While I agree that not being able to hold hands with your honey in the dead of winter without freezing your fingers off is a problem, I'm not totally sure this is the best solution. They just kind of seem like fuzzy handcuffs. Maybe that's just me, though.

Well. This one certainly inspired some strong reactions. Reactions like, “What the fuck is this?! No. No,” accompanied by a forceful toss to the table:

And this glorious facial expression, which projects both confusion and revulsion to me:

I'll admit to being somewhat curious about the thought process that led to the invention of Fundies. Did someone honestly sit down and think, “Gee, you know what I wish existed? Underwear that two people could wear at once. That way I could be with my schnookums all the time!”? Or is it just a massively successful piece of trolling? The world may never know.

Just wait til you see the couples actually try to put these things on. It's priceless… but maybe I'd just better let you watch it for yourself:

More like this
The 19 Best Tweets & Memes About Bisexual Awareness Week
By Lexi Inks
Are Quality Time & Gift-Receiving Love Languages Compatible?
By Lexi Inks
The Differences Between Polyamory & Open Relationships
By Lexi Inks
10 Ways To Be More Empathetic To Your Partner
By Raven Ishak and Lexi Inks
Get Even More From Bustle — Sign Up For The Newsletter