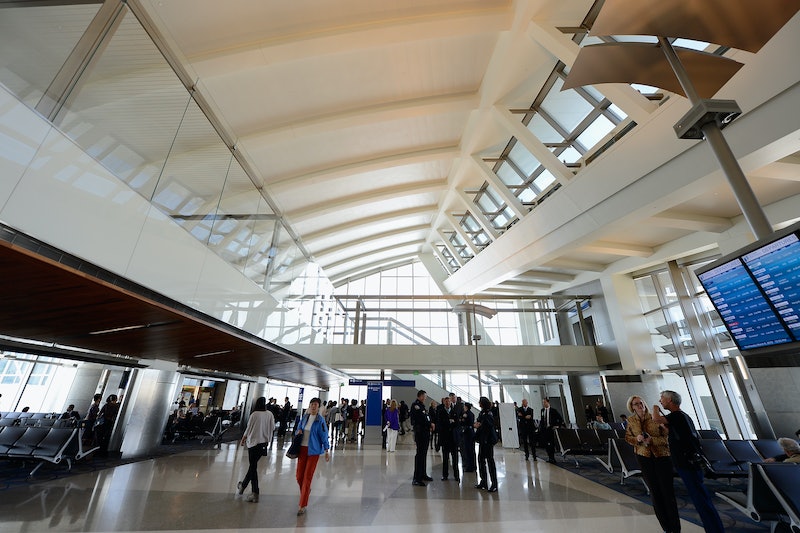 We've seen some bad practical jokes, but this one takes the biscuit: The LAPD is investigating a string of explosive dry-ice bombs found over the last two days at Los Angeles International Airport. Thought to have been a prank, the first dry-ice bomb went off on Sunday evening in an empty, non-public restroom at the airport's Terminal 2. Twenty-four hours later, on Monday evening, a second dry-ice bomb — which is to say, bottles containing dry ice, which then explode from a chemical reaction — exploded in a restricted-employees' section of the tarmac of the Tom Bradley International Terminal at LAX. Two more unexploded bombs were later found.

Sections of the terminal were shut down after the explosions as a standard precaution, but there was "minimal disruption" to the airport's activities both Sunday and Monday nights.

What sort of prank is an ice bomb? Well, anytime the words "FBI," "bomb," and "airport" are strung together in the same sentence, it sounds kind of scary. But there's not a lot to suggest that the bombs were intended to do much damage: nobody was nearby at the time of the explosions, and there has been no airport damage, no injuries, no terrorist ties, and no threats in conjunction with the "relatively harmless" bottles. Because the dry-ice bombs were all found in areas not accessible to the public, this hints that someone on the inside might be the pranking culprit. "'Apparently there is no nexus to terrorism right now," confirmed one LAPD official.

This isn't the first time this year that a dry-ice bomb has gone off without harm: Back in May, visitors of Disneyland's Toontown area heard a loud explosion, and parts of the park were promptly evacuated. Turns out that someone had placed a dry-ice bomb into a Toontown trash can, and an employee was later arrested for allegedly being the culprit. Like the LAX incident, there were no damage or injuries.

And back in 2011, a group of teenagers embarked on a "graduation prank," driving around Laguna Hills, Cali., pelting pedestrians with — you guessed it — dry-ice bombs. No one was injured, but all four teens were arrested, with the bombs being deemed serious enough to hold the teenagers on $1 million bail. Two were later charged.