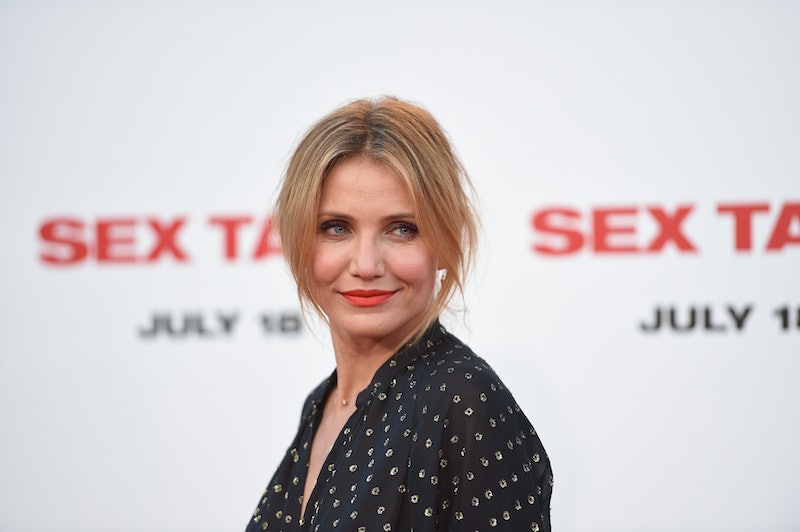 The evolution of Cameron has fully commenced, and god help us if anything of her former self remains in the years to come. Following the debut of her brunette hair a mere days ago, word on the street has it that 42-year-old Cameron Diaz has pierced her nose, sporting a single tiny stud visible only with the hawk-like eye of a paparazzi zoom lens. We can only expect that the next move will be a visible tattoo, perhaps one of husband Benji Madden’s name to match his — a timeworn testament to love that everyone knows lasts forever.

The stud made its premiere following a “triple date with her sister- and brother-in-law Nicole Richie and Joel Madden, and Jessica Alba and her husband Cash Warren,” reports InStyle. Of her slow transformation to a darker lifestyle, we speculated earlier this week that it’s a look we’re sure her husband, Benji Madden was totally game for,” making note of Diaz’ and Madden’s matching all black ensembles. Diaz wore a fitted black dress that she paired with a long, simple jacket, sheer black nylons, and accented spike jewelry (many will argue they are mere triangles —let not your pre-existing bias fool you).

The real star of this show, however, was the small ornament in her nose. “The gold stud — which she first debuted in December — was paired with spike earrings and a matching necklace,” reports E! Online. “The overall effect was a bit edgy, which makes us wonder if Cameron's rocker-husband has been influencing her style.” So we’re not the only ones drawing nonexistent parallels. Also, how has she been hiding this for four months?

In recent months, many have speculated that Diaz may be pregnant with twins, news that comes following recent comments the actress made about wanting children. Regardless of whether the nose ring stays, Diaz has ‘former Charlie’s Angle’ on her resume, making her enough of a badass mommy-to-be in her own right.