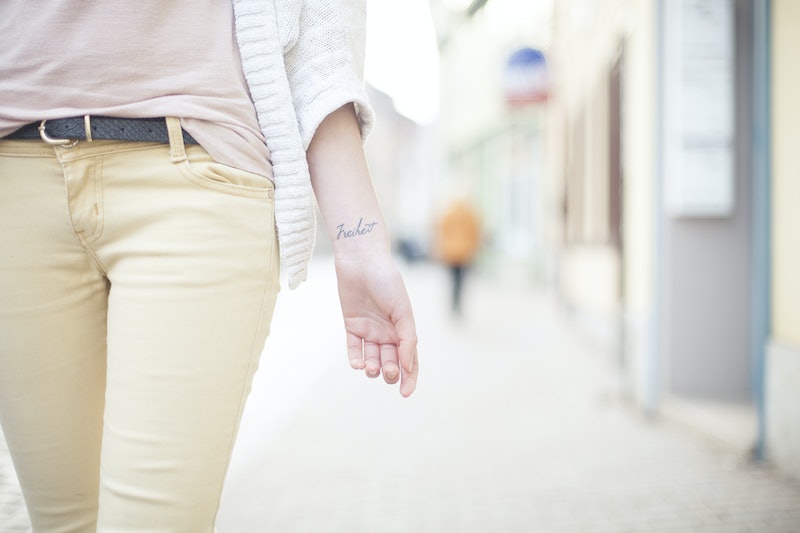 So you've decided you're getting a tattoo. You've picked out the quote or image, have figured out exactly where you want it to go, and have bragged/vented to all your friends about how excited/terrified you are about having it done. The only step left is actually making the trip to the tattoo parlor, because everything else — figuring out how you're going to dress it up, choosing the perfect Instagram filter, deciding when and how to tell your parents you have a tattoo — can come later, right?

Um, not quite. While the outfits and photos can wait until the tattoo's done, telling your parents — especially if they're not the biggest fans of permanent alterations to your body — should be something you make a pre-appointment priority. Sure, they can't force you to remove it, and they probably won't go so far as to cut you off or make your life miserable, but they can — and likely will — be super pissed if you get it done without so much as a heads up. Still, telling your parents you're about to do something they hate is hard, and it's understandable if you're not quite sure how to approach the situation. Here's my advice.

1. Mention It Early And Often

Even if getting a tattoo is only a vague possibility for you, mention that you're thinking about it to your parents way before you'd actually get it done. They might laugh and go, "sure you are," but the idea will be planted. If you mention it often enough (but not too often, mind you), they'll realize you're not just kidding around, and by the time you actually are serious about getting it done, it won't come as a total shock.

2. Choose Something They Won't Totally Hate

Look, ultimately, what tattoo you get is up to you. Want to get a tiny little heart or a quote from a movie your parents have never seen? Go right ahead — but be prepared for them to go, "did you really have to do that?" Take it from me: it's a lot nicer when your parents can take issue with you getting a tattoo, but not the tattoo itself. My parents weren't fans of me getting tattooed in the first place, but they still haven't been able to find a reason to complain about the actual ink I got, a quote from a book all three of us know and love.

3. Remind Them That You're An Adult

By this, I don't just mean telling them that it's your money and that they can't stop you (which might be true, but isn't exactly helping your cause). When talking about the tattoo with your parents, make sure they realize that you're being responsible about where you're getting it done, how you're going to take care of it, and the location on your body that it's going to go ("look, Mom, it can be hidden by my hair!"). They may not be happy about your decision, but they'll take comfort in knowing that you're at least being smart about it.

4. Tell Them It's Going To Be The Only One You're Ever Getting

I don't care if it's a total lie and you're already planning your next tattoo: Tell your parents that this is the only one you're ever going to get. If a few years down the line, you change your mind? Let them deal with it then, when they're used to it, not at the beginning, when the only thought worse than their kid getting tattooed is their kid getting tattooed five more times.

5. After It's Done, Tell Them How Much It Hurt

Even if you barely felt a pinch, tell your parents that getting your tattoo hurt really badly. They'll feel a little bad for you, but mostly, they'll be secretly glad you suffered as a result of your terrible decision. Maybe they'll even think it'll stop you from getting another one! As for that: Refer to Rule #4. Trust me, it's for the best.

More like this
This Week’s New Makeup Releases & More Beauty Headlines
By Audrey Noble and Erin Stovall
Your Guide To Treating Hyperpigmentation, Straight From The Pros
By Shani Hillian
The Body Shop’s New Range Has More Antioxidants Than Retinol
By Justine Knight
Here's How Lip Oil Compares To Balms & Glosses
By Paris Giles
Get Even More From Bustle — Sign Up For The Newsletter