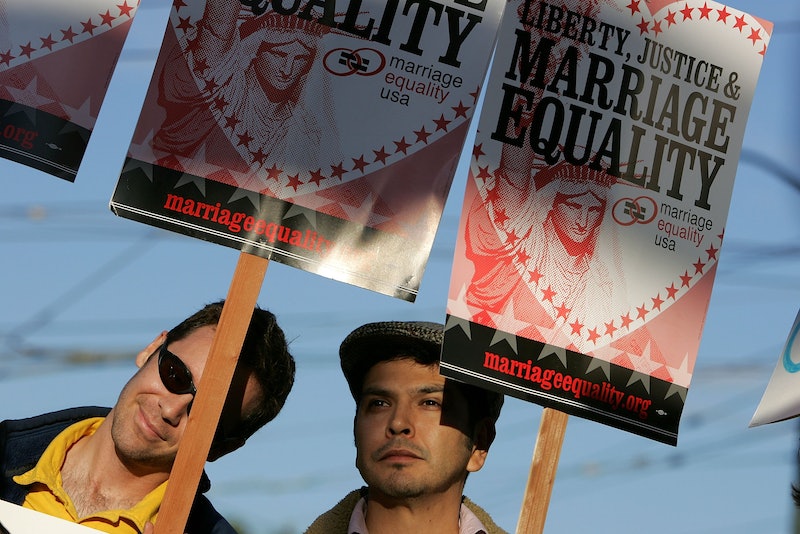 There's at least one North Carolina state official who did not sleep well on Monday night. The state's attorney general, Roy Cooper, has had the ball thrown squarely into his court on the same-sex marriage front after the Buncombe County Register of Deeds, Drew Reisinger, said he would begin accepting marriage license applications from same-sex couples in light of the Supreme Court ruling. Reisinger said he would hold on to them while he asked Cooper for approval.

"I support marriage equality," Cooper told the AP over the weekend. The Democrat is widely believed to be plotting a run for governor in 2016, so it's not altogether surprising that he has adopted the I-support-it-personally-but-not-professionally stance that has just recently gone out of vogue with Northern Democrats. He has previously stated that he won't discuss the constitutionality of any of North Carolina's anti-gay statutes, but said that he is happy to debate them as matters of policy. If North Carolina was to start issuing marriage licenses to same-sex couples, it would be the first state in the American Southeast to do so. It only recently enacted a statewide ban on gay marriage, in May 2012.

Cooper's contradictory positions can seem puzzling: he's scheduled to speak at a fundraiser for the state's gay rights group next month, but is also a defendant in a suit filed by same-sex North Carolina couples over the right to marry. These incongruities worry state conservatives, who wonder whether the attorney general will subconsciously present a softball opposition to same-sex marriage proponents.

So what happens now? A statement from the Buncombe County Register of Deeds said that Reisinger is expecting "at least six same-sex couples" to request marriage licenses today. "He will accept the applications but withhold his own signature," the statement also said.

“I will let each couple know that it is my hope to grant them a license, but I need to seek the North Carolina Attorney General’s approval," Reisinger said. "I have concerns about whether we are violating people's civil rights based on this summer's Supreme Court decision." And then, the ball is tossed back to Cooper, who will have to try to reconcile his personal views with his political positions.

Meanwhile, the state of New Jersey is in a not altogether dissimilar situation. Two weeks ago, Judge Mary Jacobson ruled that her state must begin allowing gay couples to legally marry starting on Oct. 22. If Governor Chris Christie doesn't successfully appeal her decision before that date, same-sex couples will be legally allowed to obtain marriage licenses in the state of New Jersey a week from today.