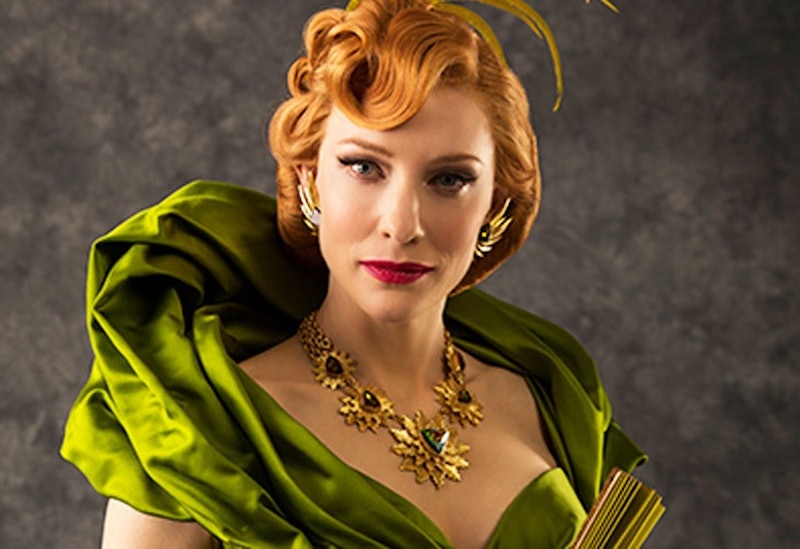 When people think about the story of Cinderella, the only accessory that most often comes to mind is the glass slipper. But that's all about to change once the live-action feature film version hits theaters on March 13. Even though Disney and director Kenneth Branagh is staying true to the animated classic, it seems they have taken some creative liberties with the look of Cindy's wicked stepmother Lady Tremaine, played by Cate Blanchett. The fierce and fearsome character got a glamorous makeover with the help of Oscar-winning costume designer Sandy Powell, who collaborated with Atelier Swarovski on a jewelry line inspired by Cinderella's Lady Tremaine.

Swarovski's Tremaine collection features a gold leaf and emerald motif similar to the jewelry worn by Blanchett's character in the film. The jewelry line includes a statement necklace ($1,690), wrist cuff ($599), earrings ($349), and cocktail ring ($299). Powell, who previously collaborated with Swarovski for her Oscar-winning costumes in Shakespeare in Love , wanted to design pieces that could be worn in real life.

"Even though this collection was inspired by Cate's character, Lady Tremaine, it was a pleasure to design something I'd actually want to wear myself, rather than for an onscreen character," Powell said. "Despite her evil role in the story, Lady Tremaine has such an elegant look in the movie, and, let’s face it, the baddie is always the best-dressed!"

We couldn't agree with her more.

Check out pieces from Atelier Swarovski and Powell's Tremaine collection below: