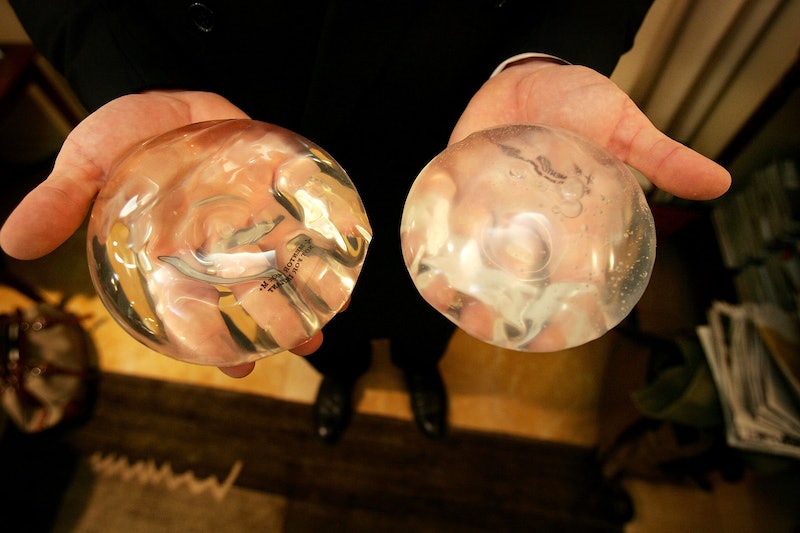 Don't you for one second pay any mind to a new study on breast implants and women's sex lives. The research — which was presented at the annual meeting of the American Society of Plastic Surgeons last week — claims boob jobs can boost sexual arousal and satisfaction for women. But the study reads more like a plastic surgery marketing tool than an objective piece of research, with data coming from self-reports of 45 female breast augmentation patients. It turns out, women who seek out dangerous, costly surgery to increase their sex appeal do, in fact, feel sexier afterward. And it says precisely nothing about the rest of us.

In the study, conducted by Brazilian researchers, breast implant patients were given a pre-surgery survey about sexuality, followed up by surveys at two, four and 18 months post-surgery. The survey included questions about "sexual desire, arousal, vaginal atrophy and sexual satisfaction." After 18 months, 36 of the patients (80 percent) reported "statistically significant increase" in sexual satisfaction and arousal levels.

ASPS spokesperson David Reath thinks this study "further proves that a woman's satisfaction with her breasts, and breast augmentation, is directly tied to her femininity and sexuality." But if so, it also proves why this is awful. What separated the 20 percent of breast implant patients whose sex lives didn't improve from those whose did? One thing: Stretch marks. None of the women whose surgery left stretch marks reported increase in sexual satisfaction.

When you tie sexuality and femininity to some standard idea of physical perfection, you're just asking for trouble. Anything goes wrong, you're screwed — and it will go wrong. All of us age. All of us change. And breast implants change, too. One of the things that's especially overlooked with implants is that they are not lifetime devices. The shelf-life of most implants is about 20 to 25 years, after which they've got to be removed or replaced. "You should assume that you will need to have additional surgeries," the FDA cautions in a long page on breast implant risks.

I understand the temptation of implants (or any cosmetic surgery), but the potential complications and photos of implants-gone-bad are relatively terrifying (and certainly unlikely to "enhance a woman's self-image, self-confidence, and quality of life" as Reath promises). I'll leave you with a few more of the FDA's many warnings:

Many of the changes to your breast following implantation may be cosmetically undesirable and irreversible.

If you have your implants removed but not replaced, you may experience changes to your natural breasts such as dimpling, puckering, wrinkling, breast tissue loss, or other undesirable cosmetic changes.

If you have silicone gel-filled breast implants, you will need to undergo periodic MRI examinations in order to detect ruptures that do not cause symptoms (“silent ruptures”). For early detection of silent rupture, the FDA recommends that women with silicone gel-filled breast implants receive MRI screenings 3 years after they receive a new implant and every 2 years after that. MRI screening for implant rupture is costly and may not be covered by your insurance.

Women should be able to make whatever choices they wish with their own bodies, but they should also know the risks.

More like this
It's A Pleasure #53: Help! My Boyfriend Won't Tell Me Why He Stopped Going Down On Me
By Sophia Benoit
The Differences Between Kinks & Fetishes, Explained
By Lexi Inks
Breeding Kinks Have Been On The Rise Since Roe V. Wade Got Overturned
By Lexi Inks
Are Quality Time & Gift-Receiving Love Languages Compatible?
By Lexi Inks
Get Even More From Bustle — Sign Up For The Newsletter