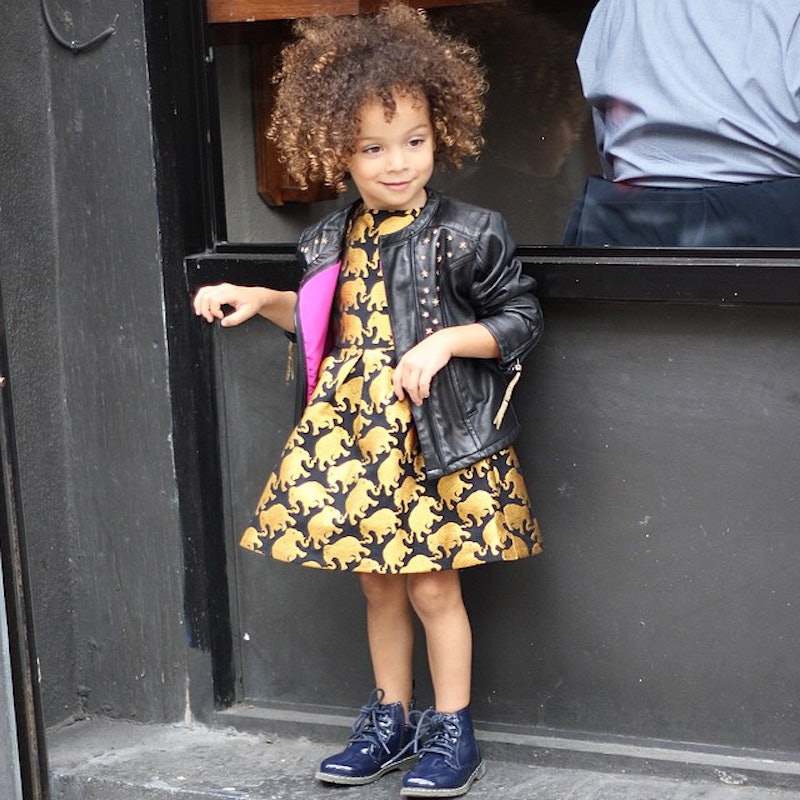 Move over, North West. There's another toddler who's slaying in the fashion game with a sense of style that's Carrie-Bradshaw-meets-Gwen-Stefani-meets-Mindy-Kaling. She’s already started to create and curate an online persona and brand, all before kindergarten. Presenting three-year-old London Scout, arguably the world's most fashionable and social media savvy toddler.

Of course, Scout isn’t doing it all on her own. For the time being, Scout's mother, Sai De Silva, is the author of Scout the City’s editorial content (and Instagrammer behind @scoutfashion), but it won’t be long before the tiny tot learns her ABCs and starts penning her own words to take over her eponymous blog. Dare I say she could be the next Tavi Gevinson?

De Silva initially started Scout the City to document Scout's most stylish day-to-day moments. While some might not agree with the idea of a toddler having a fashion blog, I think it’s great outlet for Scout to express herself creatively through fashion and her presence in high fashion bloggersphere is refreshing because of her biracial ethnicity.

Scout's mother, De Silva, told Today, “I think it's important for her. It's beautiful. I want her to always embrace that, embrace that she comes from two different cultures. It's very fortunate for her."

3. Living in NYC by way of Montreal, this chic and cosmopolitan three year old is a straight up expert at navigating the streets in style.

4. Every now and then, she even has to ward off the paparrazi. (North West, make room.)

5. Plus, when it comes to posing, she's as versatile as Coco Rocha and ALWAYS finds her light.

5. Not to mention people are already twinning with both her athleisure and classic feminine looks.

6. And she's mastered the art of mixing textures and layering.

7. Being a fashion blogger is hard work (despite what most might think) but this fashionis-tot makes it look so easy.