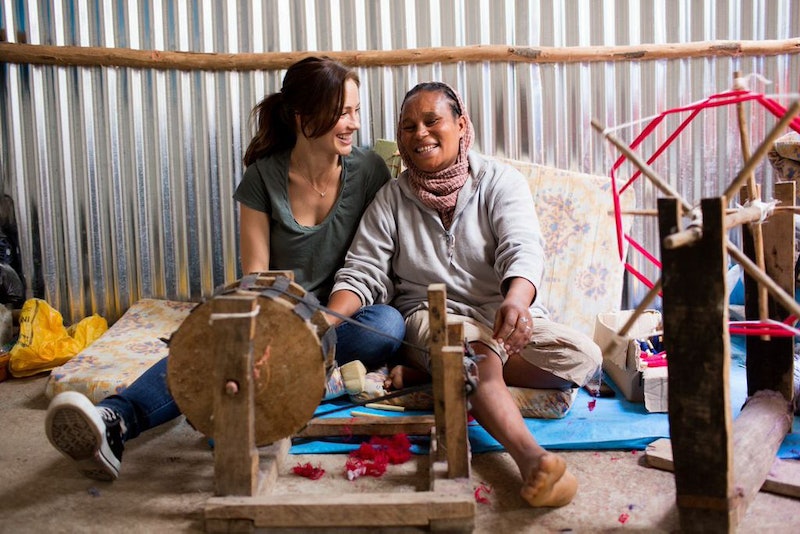 In so many instances, celebs "endorse" a charity or product with a give-back element by merely lending their name and fame to the initiative, without doing much else. But then there's actress Minka Kelly, who designed the Hibret clutch with fashionABLE, a Nashville-based accessories company.

When I spoke to Kelly about her involvement with the organization — which works to get at-risk women in impoverished or developing nations out of the sex industry in favor of supporting their families via small business cooperatives and by partnering with businesses that have fair wages and hiring practices for females — her passion for this cause was palpable. Her voice was animated and every syllable radiated with joy at being able to make a change in a woman's life. I was easy to see that the actress is deeply engaged by this cause. A cause that also led to the discovery that she's a pretty talented designer.

Kelly, a doppelgänger for Leighton Meester if there ever was one, partnered with fashionABLE founder Barrett Ward back in 2009. She also visited women in Ethiopia and Kenya in 2014. It was during that trip that she was inspired, on the spot, to design the Hibret pouch.

"Hibret" means "collaboration" in Amharic, the traditional Ethiopian language, and that's exactly what it is — a collaborative project. Kelly's idea paired together skilled scarf weavers (which were part of the first fashionABLE endeavor) and the leather artisans that fashionABLE works with to make this one-of-a-kind clutch.

That is what I call a "win-win" for the maker and the carrier of the handbag.

So here are the five key points about the Hibret and fashionABLE that make it a brand you want to shop and support. This kind of fashion and feel good symmetry don't happen daily, but they do happen here.

Ward was inspired to launch this initiative when he and his wife were residing in Ethiopia and saw women working jobs in the sex industry for a quarter. Yes, 25 cents. "I knew I had to do something," he said. "We don't just need charity. We need a different opportunity," and with that he sought to empower and employ women.

2. From Shame To Pride

Kelly recalled meeting a woman who worked in the sex trade in order to pay for her sister's breast cancer treatment. "I understood what sacrifice and courage meant," she told me. "I heard a lot of women say that they were ashamed of themselves and worried their kids would be ashamed and they didn't want their kids to know what they did. My mom was an exotic dancer and she was ashamed of herself… In my experience, it's done out of desperation, where there is no guidance, no opportunity, or there is a circumstance."

The biggest reward for Kelly is "to see [the women] transition from shame to being proud, since they make these beautiful products."

The Kelly-designed pouch was born on the leather factory floor, literally! She visited the women who were working and was so enthralled by the craftsmanship she saw. "I was like, 'Can we design something now? What is there a need for? What do I use every day? What can we make that someone needs?" the starlet said, with more excitement filling her voice. "I looked at my bag. Inside, I have a clutch. I thought, 'Let's make a clutch we can use day and night, for the girls who are busy. It can be cosmetic bag, or what you use at night."

She added, "It goes well with casual jeans and a tee or when dressed up. The color can be dressed up or down. Right there, we started picking colors, sizes, and thinking about what the zipper should be."

4. An Even Happier Accident

Once the prototype was made, Kelly wasn't satisfied. "It was beautiful, but what was missing?" she asked herself. "It didn't scream 'fashionABLE' to me. I associated the scarves with the women we helped, so we decided to incorporate them."

Check out Kelly, the budding fashion designer! When she asked if they could line the inside of the bag with the scarves, "the answer was 'no' at first, since they are so delicate, and would take a beating, putting your stuff inside. So the girls made a fabric that was thicker," she revealed.

So for utility's sake (in something of a happy accident), she merged both of fashionABLE's efforts into one.

Right now, the clutch is available in a luscious hot pink shade and a rich navy blue. Kelly and co. are working on other colors for future seasons. Totes and cross bodies are available as well.